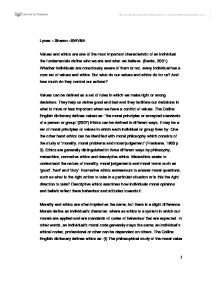 Lynas - Sharon -SWV&E. Values and ethics are one of the most important characteristic of an individual the fundamentals define who we are and what we believe. (Banks, 2001). Whether individuals are consciously aware of them or not, every individual has a core set of values and ethics. But what do our values and ethics do for us? And how much do they control our actions? Values can be defined as a set of rules in which we make right or wrong decisions. They help us define good and bad and they facilitate our decisions in what is more or less important when we have a conflict of values. The Collins English dictionary defines values as: 'the moral principles or accepted standards of a person or group.'(2007) Ethics can be defined in different ways, it may be a set of moral principles or values in which each individual or group lives by. One the other hand ethics can be identified with moral philosophy which consists of the study of 'morality, moral problems and moral judgement' (Frankena, 1963 p. 3). Ethics are generally distinguished in three different ways by philosophy, metaethics, normative ethics and descriptive ethics. Metaethics seeks to understand the nature of morality, moral judgements and moral terms such as 'good', 'bad' and 'duty'. Normative ethics endeavours to answer moral questions, such as what is the right action to take in a particular situation or is this the right direction to take? ...read more.

The principle of utility on it own does not inform us on the distribution of happiness and who should be promoted. Secondly, human nature is dynamic and the perspective fails to take into account the changing character of people and the changing character of what is good for them. Thirdly, morality is not based on the consequences of actions, it should be based on the essential view of justice. With regards to social work ethics, to so some extent utilitarianism can be recognized in the anti oppressive approaches in the 1980s and 1990s (Dominelli, 1988; Langan and Lee, 1989; Thompson, 1993). Other principles such as non preferential treatment, respect, human dignity and the promotion of the service user's general welfare and public good are also evident in the values of social work Kantian ethical perspective is deontological; it concentrates only on what should be done regardless of the consequences. The consequences are not believed to be morally significant and are not taken into consideration. Kantian ethics are focused on acts for the sake of duty; it is these acts that are considered to have moral worth. In other words, doing the right thing based on the motives or intentions of the act for the right reasons, not for the consequences that may follow the act. According to Kant a person should 'act as to treat humanity, whether in your own person or that of any other, never solely as a means but always also as an end' (1964, p.96). ...read more.