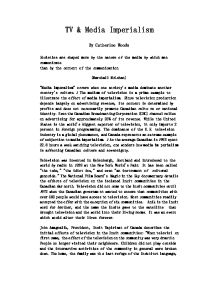 Societies are shaped more by the nature of the media by which men communicatethan by the content of the communication(Marshall McLuhan)&quot;Media Imperalism&quot; occurs when one society's media dominate another country's culture

TV & Media Imperialism By Catherine Woods Societies are shaped more by the nature of the media by which men communicate than by the content of the communication (Marshall McLuhan) "Media Imperalism" occurs when one society's media dominate another country's culture.1 The medium of television is a prime example to illustrate the effect of media imperialism. Since television production depends largely on advertising revenue, its content is determined by profits and does not necessarily promote Canadian culture or national identity. Even the Canadian Broadcasting Corporation (CBC) channel relies on advertising for approximately 25% of its revenue. While the United States is the world's biggest exporter of television, it only imports 2 percent in foreign programming. The dominance of the U.S. television industry is a global phenomenon, and Canada represents an extreme example of subjection to media imperialism.1 As the average Canadian in 1993 spent 22.8 hours a week watching television, one wonders how media imperialism is affecting Canadian culture and sovereignty. ...read more.

People no longer visited their neighbours. Children did not play outside and the interactive activities of the community in general were broken down. The home, the family was the last refuge of the Inuktitut language, and television, by coming into the home, was invading this last refuge."3 The average Inuit did not understand the English language and could not distinguish between war and violence on the news or actors acting in a drama. Television created an unreal world for the Inuit communities and did not reflect their northern reality. "The foundation of our culture has always been the concept of sharing things...[Yet] commercials and game shows suggest that people should go after these things for their own benefits."4 It was to avoid these negative effects that a village 300 miles north of the Arctic Circle refused the offer of television unless the villagers themselves could control the content and production of their own television programming. ...read more.

Now, CBC northern television service is available in all Arctic communities regardless of size, carries two hours a week of its own programming in the Inuktitut language and an additional six hours of Inuit Broadcasting Corporation (IBC) and Taqramiut Napingat Inc. (TNI) programming. The rest is mainly southern fare, including U.S. entertainment shows.5 For years, the world outside the Inuit communities had been saying that Inuit culture and language were dying and it was believed Inuits would assimilate into the rest of society. However, that assimilation has yet to occur. Television, for better or worse, has made the world smaller for the Inuit people and for all Canadians. It is our TV viewing that shapes our understanding of the world and ourselves. However, it is saturated with U.S. influence and media imperialism. How much television has affected our culture and sovereignty is yet to be seen. Only time will tell. Notes 1. Robert J. Brym. New Society: Sociology for the 21st Century. Toronto: Harcourt Brace, 1998: 126 2. Brym, 104 3. Magic in the Sky. Dir. Peter Raymont, 1981. 4. Ibid. 5. Ibid. ...read more.