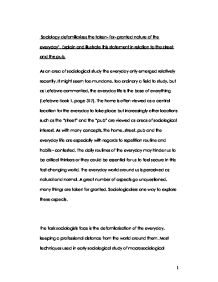 Sociology defamiliarizes the taken- for- granted nature of the everyday'. Explain and illustrate this statement in relation to the street and the pub.As an area of sociological study the everyday only emerged

Sociology defamiliarizes the taken- for- granted nature of the everyday'. Explain and illustrate this statement in relation to the street and the pub. As an area of sociological study the everyday only emerged relatively recently. It might seem too mundane, too ordinary a field to study, but as Lefebvre commented, the everyday life is the base of everything (Lefebvre Book 1, page 317). The home is often viewed as a central location for the everyday to take place but increasingly other locations such as the "street" and the "pub" are viewed as areas of sociological interest. As with many concepts, the home, street, pub and the everyday life are especially with regards to repetition routine and habits - contested. The daily routines of the everyday may hinder us to be critical thinkers or they could be essential for us to feel secure in this fast changing world. The everyday world around us is perceived as natural and normal. A great number of aspects go unquestioned, many things are taken for granted. Sociologicalers one way to explore these aspects. The task sociologists face is the defamilarization of the everyday, keeping a professional distance from the world around them. Most techniques used in early sociological study of macrosociological processes ignored fundamental questions such as the taken- for- grantedness of everyday situations and many areas went unexplored and unquestioned. ...read more.

Only areas covered by the experiments such as the imaginary walking down the street with the shoes in your hand are revealed by the experiment. Another breaching example Garfinkel used was where students were asked to behave like boarders in their own family homes not only shows how taken for granted appropriate behaviour is, but also how these unwritten rules are unconsciously connected to certain roles. This process of taking up and playing roles is described by Goffman (Hamilton, 2002). Ethnomethodology is a sociological tool that allows the researcher to reveal the taken- for- grantedness in everyday life. It is value free and concerned with the details of human interaction. However, the researchers still have to interpret what they see, and they do this with their own ideas, their own preconceptions, no matter how hard they try to defamilarize with the world around them. The pub is another area of sociological interest it is a site that is set in a social and historical context traditionally dominated by men. In the late1930's to the 1950's Charles Madge and Tom Harris carried out a mass observation study to observe and record the beliefs and thoughts of ordinary working class people. The negative side of this research was that it focused only on men and did not take into account women's opinions. ...read more.

Furthermore, the routines of everyday life the very base of our identities, it is the things we do day after day which shape how people see themselves. (Felski Book 1, page 352) This is a valid opinion since there appears to be more positive aspects to the repetitive everyday life, as Silverstone shows. It is particularly the routines and habits of the everyday that help us to make the harsh world manageable. Through these repetitive actions the world becomes more familiar and predictable, which greatly increases our sense of ontological security (Silverstone Book 1, page 355). The pub becomes a haven where people can retreat. This need for a place of retreat becomes a site of everyday practices and symbols through which people attempt to manage themselves as well as the surrounding world. The street and the pub can be viewed as social constructs invested with a range of meanings that may differ according to the culture, place and time in which they are made, they are open to debate and in the case of the street as much a state of mind as a physical locale. The imagery of the street has a long history can be explored in it's representations in literature art and film this helps the distinction between physical location and state of mind. (Chapter 1 page 98). Everyday is personal to the individual and their community and is therefore different in differing circumstances and cultures. ...read more.