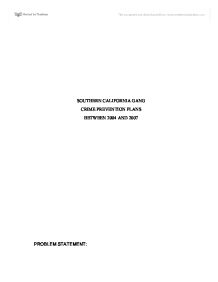 Growing up in California and seeing gang activity throughout his years, Breyer announced that the idea of longer incarceration periods was going to be one of the options that the court was definitely going to look in to. After many submissions by many departments from all around the country were made, the Supreme Court came with the breaking down of decisions to only three options. They were: Longer incarceration and bigger fines, boundary limitations, and restriction of weapons and armory from crime felons (8). The court asked police officers around the state and also asked other law enforcement agencies to help with their opinions of what should be proposed and why (9). In a matter of weeks, the court was flooded with suggestions and tips on what should and should not be chosen for the issue and why. One of the suggestions came from the Santa Ana Police Department arguing how they should release the option of restricting felons from the possession of weapons, knowing that from past experiences within the department that it would be a major controversial issue and how it would anger many people. It also bothered people for the fact that they would fight the issue in court if it ever came into effect. With this in consideration, the court made little effort to keep that idea going and ended that option there before it became big (10). ...read more.