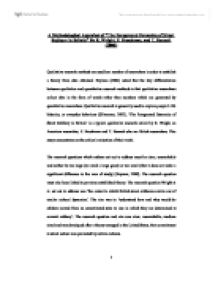 A Methodological Appraisal of "The Foreground Dynamics of Street Robbery in Britain" By R. Wright, F. Brookman, and T. Bennett (2006) Qualitative research methods are used by a number of researchers in order to establish a theory from data obtained. Bryman (2004) noted that the key differentiation between qualitative and quantitative research methods is that qualitative researchers collect data in the form of words rather than numbers which are generated by quantitative researchers. Qualitative research is generally used to explore people's life histories, or everyday behaviour (Silverman, 2001). 'The Foreground Dynamics of Street Robbery in Britain' is a typical qualitative research article by R. Wright, an American researcher, F. Brookman and T. Bennett who are Welsh researchers. This essay concentrates on the critical evaluation of their work. The research questions which authors set out to address must be clear, researchable and neither be too large (to avoid a large grant) or too small (that it does not make a significant difference to the area of study) (Bryman, 2000). The research question must also been linked to previous established theory. The research question Wright et al. set out to address was 'the extent to which British street robberies evolve out of similar cultural dynamics'. The aim was to 'understand how and why would-be robbers moved from an unmotivated state to one in which they are determined to commit robbery'. ...read more.

There were also only two females who were interviewed therefore it would also be hard to generalise the findings to the population. There are a number of major epistemological strengths and weaknesses. By using a semi-structured interview technique, the researchers were limited. As with all interviews the participants may lie in order to conform to what they think the interviewers are looking for, thus producing false data. The prisoners may also have withheld information which they thought may have become public in order to protect themselves. Ethical must be considered when conducting a research study. The British Society of Criminology Code of Ethics for Researchers in the Field of Criminology is a guide which should be followed to ensure the highest ethical standards in criminological research. There are four main areas ethical issues, these are 'harm to participants, lack of informed consent, invasion of privacy and whether deception is involved, as cited by Diener and Crandall (1978)1. According to Bryman (2004) and Arskey and Knight (1999), harm to participants can include a number of effects such as loss of self esteem, stress due to pressure in giving answers which participants believe the researcher is looking for. Morgan (1972)2 cited that 'information may be given to the researchers which may attract media attention at the end of the study and if this occurs, researchers have little control over how the material will be used'. ...read more.

The reader does not know certain aspects of the study such as whether or not the participants were paid to participate in the study. Bryman, (2004) stated validity is 'the degree to which a measure of a concept truly reflects that concept' (Bryman, 2004). The findings of Wright et al. cannot be generalised because the age range of the sample is small. The average age was twenty-five and modal age was nineteen. It may be the case that individuals above the age of forty are less likely to commit street robbery regardless of their ethnicity. The participants were also from the same area, this may also affect findings as different regions in England and Wales may have different cultures as there may be different dominant ethnicities in each area, which may effect individual's behaviour. Another main issue is that the senior author, Richard Wright was an American and had not previously conducted research in the United Kingdom. Therefore, it is questionable to how much he knew about English culture and living on estates. In conclusion it was found that Richard Wright is a well experienced senior researcher who has conducted similar research on robbery in the United States. The method he used to conduct the study is typically one used for qualitative research. The British Criminology Code of Ethics was followed by the researchers in order to ensure the research was carried out according to the highest ethical standards. ...read more.