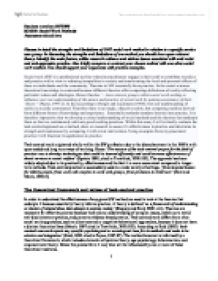 Student number: 0373390 SO2009: Social Work Methods Assessment task two Discuss in detail the strengths and limitations of ONE social work method in relation to a specific service user group. In discussing the strengths and limitations of one method you should draw upon relevant theory. Identify the main feature, utilize research evidence and address issues associated with anti racist and anti-oppressive practice. Also briefly compare or contrast your chosen method with one other social work method. You should support your arguments with practice examples. Social work (SW) is a professional activity wherein practitioners engage in their craft to contribute to policy and practice with a view to reducing inequalities in society and ameliorating the local and personal effects of these on individuals and the community. Theories in SW essentially form practice. In the social sciences theoretical knowledge is contested because different theories offer competing definitions of reality reflecting particular values and ideologies. Hence theories '...have interest groups within social work seeking to influence over our understanding of the nature and practice of social work by gaining acceptance of their 'theory'' (Payne, 1997:2). In fact according to Berger and Luckmann (1966) even our understanding of reality is socially constructed. Therefore there is no single, objective reality, but competing realities derived from different forms of knowledge and experience. Essentially methods translate theories into practice, It is therefore imperative that we develop a critical understanding of social methods and the theories that underpin them so that we continuously cultivate good working practices. Within this essay I will critically evaluate the task-centred approach as a method, draw on research to assess it's effectiveness in practice and determine its strength and weaknesses by comparing it with crisis intervention. Using examples from my placement practice I will illustrate its application to practice. Task-centred work originated wholly within the SW profession due to the disenchantment in the 1960's with open-ended and long term ways of working. ...read more.

Pivotal to the success of the practice is recognition of the problem and full co-operation of the SU. Another contact with SU Y demonstrated some common problems with the task-centred approach. SU Y was from an ethnic community background and she also sought re-housing away from the perpetrator. The process broke down because the SU had doubts over the course of action she wished to take and did not take the steps she was required to do as part of the process, and ultimately refused to accept her partner as a DV perpetrator and chose to go back to him. The task-centred approach is very much dependent on the SU accepting the problem and being prepared to take action to alleviate this. For example research carried out by Goldberg et al (1977) indicated '...that the explicitness of the method may be inappropriate where clients cannot face certain basic threats...' (Goldberg, E.M. et al, 1977:14). Evaluating Task-centred Work A significant body of research into work with a range of user groups has established task-centred work as one of the most effective of all approaches to SW. For example the benefits of short-term work have been illustrated by some well-known research. Reid and Shyne's (1969) research project, Brief and Extended Casework '...found that the interventions which were allowed to run their full course were no more and no less effective than those which were foreshortened' (Adams, Dominelli and Payne, 2002:191). The approach has been widely adopted due to its practicality, effectiveness and the fact it is more economical compared to longer-term methods. The fact it offers a unifying model of practice for SW, in a broad range of circumstances adds to its appeal. It also invites greater participation by the SU which based on evidence from follow-up interviews (Goldberg et al, 1977) fosters a sense of achievement and confidence. A key advantage of short-term work is that it curtails SU dependency and therefore is more effective in empowering the SU. ...read more.

* The partnership approach and clarity of task-centred work and 'the emphasis on looking at the environment pressures have led to claims that they are both effective in use with anti-discriminatory work, in offering empowerment...' (Ahmed, 1990 and Hagan, 19994 cited in Payne, 1997:98). However analysts have identified areas of difference as well; * Different problem situations- Reid and Epstein (1972) specifically distinguishes task-centred from crisis intervention. They say that task-centred is applicable to a range of problems, whereas crisis interventions have specific definition with specific psychological and behavioural aspects which require specific methods and techniques. * Theoretical differences- Ego psychology in crisis intervention. The theory is more life origin based. All people and groups suffer crises caused by hazardous events at some point in their lives. It accepts crisis as part of everyday life and aims to provide support to overcome a crisis by making people emotionally stronger in order to deal with future problems better. While the task-centred approach is much more pragmatic, taking problems as given not inevitable. Seeking to deal with an individual problem in a pragmatic manner (Payne, 1997). * Task-centred method is more structured compare to crisis intervention. According to Reid and Epstein (1972) task-centred practice has '...clear definition of target problems, tasks and time limits' (Payne, 1997:97). Conclusion The task-centred model has proved itself to be an effective method and is popular with both practitioners and SU's alike. It has the potential to maintain good professional practice while satisfying agency requirements of efficient use of time and resources. 'However, this degree of accommodation can appear ambiguous and perhaps explain why task-centred method is described on the one hand, as supporting managerialist objectives...and on the other as offering much potential for empowering clients' (Adams, Dominelli and Payne, 2002:198) The balance must be carefully monitored to ensure that the task-centred approach is being used predominantly because it is the best example of good practice in SW as opposed to bureaucratic advantages taking precedence. ...read more.