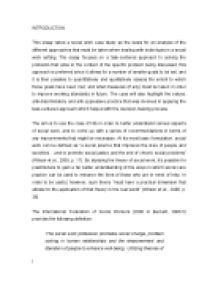 TASK-CENTERED APPROACH. This essay takes a social work case study as the basis for an analysis of the different approaches that must be taken when dealing with individuals in a social work setting

﻿INTRODUCTION This essay takes a social work case study as the basis for an analysis of the different approaches that must be taken when dealing with individuals in a social work setting. The essay focuses on a task-centered approach to solving the problems that arise in the context of the specific problem being discussed; this approach is preferred since it allows for a number of smaller goals to be set, and it is then possible to quantitatively and qualitatively assess the extent to which those goals have been met, and what measures (if any) must be taken in order to improve working standards in future. The case will also highlight the values, anti-discriminatory and anti oppressive practice that was involved in applying the task-centered approach which helped with the decision-making process. The aim is to use the case of NG in order to better understand various aspects of social work, and to come up with a series of recommendations in terms of any improvements that might be necessary. At its most basic formulation, social work can be defined as ?a social science that improves the lives of people and societies? and to promote social justice and the end of chronic social problems? (Wilson et al., 2008, p. 17). By studying the theory of social work, it?s possible for practitioners to gain a far better understanding of the ways in which social care practice can be used to enhance the lives of those who are in need of help. In order to be useful, however, such theory ?must have a practical dimension that allows for the application of that theory in the real world? (Wilson et al., 2008, p. 36). The International Federation of Social Workers (2000 in Beckett, 2006:5) provides the following definition: ?The social work profession promotes social change, problem solving in human relationships and the empowerment and liberation of people to enhance well-being. ...read more.

This approach failed, and eventually AG and I decided that I should try to talk to him alone. Once AG was gone, I introduced myself more formally to NG and explained exactly who I was and what I was doing there. It was extremely difficult to engage with NG on any of the levels prescribed by Chris Trotter, who suggests that ?all clients will eventually show some willingness to engage, and it?s up to the social worker to interpret what few signals there might be in order to understand how the client is sending signals relating to the way in which he or she is willing to engage? (Trotter, 2006, p. 17). In other words, Trotter believes that clients will send signals, sometimes very subtle, to indicate how he or she might be willing to engage. However, on this first visit to NG, no such signal was detected. Since I had been forewarned by the GP and AG that NG might become angry if pushed too hard, I had already decided that it might be necessary to wait until my second visit to fully engage with him. Therefore, after half an hour of talking to him alone, I began to explain clearly and simply what my role was and how I was going to help him. Trotter argues that ?by explaining such matters in clinical detail, it might seem scary to the patient, but it might also be encouraging for him or her to realise that there are strong formalized methods of dealing with the problem, and will stress the professionalism and education of the social worker? (Trotter, 2006, p. 37). I explained to NG exactly when I would be returning and what I planned to do, and then I left after briefly giving the same information to his wife, AG, in the kitchen, where NG couldn?t hear us. I also let her know that I was there for her as much as for her husband, and indicated that on my next visit I would seek to spend some time talking to her about how she was coping. ...read more.

CONCLUSION The recovery of NG from his post-hospital state was remarkable and effective. When he was released from hospital, NG was depressed and, those who previously knew him described him as, ?a different man?. The effect on both NG and his wife AG was obvious, and it was clear that this was a situation that needed to be addressed. Furthermore, the belligerence with his neighbours was causing social problems that had the potential to grow into full feuds. It was clear at the start that the situation could only be improved by prompt and careful application of social work principles, mainly the task-centered approach, in order to improve NG and AG?s situation and return them from a position of apparent mutual depression. As Oko notes, ?some situations are best saved early on, as later intervention is almost impossible? (Oko, 2008, p. 106); this was one of those situations. The task-centered approach worked since it allowed steps to be laid out in a clear manner that was both clinical and easy to understand. Although NG was mostly unresponsive when I set these steps out to him on the first visit, he later clearly exhibited signs of having understood and processed them. Furthermore, the task-centered approach was easy for AG to understand, and it was particularly good to see the way in which this husband and wife team approached the steps together. As Malcolm Payne has suggested, ?the ideal situation is one in which the social worker becomes the facilitator for the individual?s action, rather than having to try to force them along a route? (Payne, 2005, p. 85); this is exactly what happened in the case of NG and AG. As Payne goes on to note, the task-centered approach is not based on finding ?an immediate solution? (but on) determining how best an individual might be able to get his or her life back on track over the short and medium terms? (Payne, 2005, p. 94). This is precisely what happened with NG and AG. ...read more.