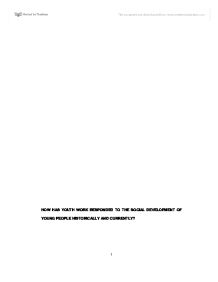 The aim of the assignment is to explore how youth work has developed in order to respond to the changing social developments of young people. Historical periods which highlighted changes to the youth service will be documented, and the exploration of key

HOW HAS YOUTH WORK RESPONDED TO THE SOCIAL DEVELOPMENT OF YOUNG PEOPLE HISTORICALLY AND CURRENTLY? The aim of the assignment is to explore how youth work has developed in order to respond to the changing social developments of young people. Historical periods which highlighted changes to the youth service will be documented, and the exploration of key factors which determine social identity and roles within society for young people will be looked at. It will include a basic timeline to show how the different approaches of policy development helped shape the development of young people historically and currently. These policies are to include The Albemarle Report, (1960) through to present day policies such as the 2005 Youth Matters and Connexions strategies. Sunday Schools, which were the beginnings, are to be explored as is the YMCA which was and still is extremely important to the development of young people. Robert Raikes (1735-1811) was the founder of the Sunday School movement. The Industrial Revolution had resulted in many children spending all week long working in factories. Christian philanthropists wanted to free these children from a life of illiteracy. The Bible was the textbook used for learning to read. Likewise, many children learned to write by copying out passages from the Scriptures. Sunday school pupils often graduated to become Sunday school teachers, thereby gaining an experience of leadership not to be found elsewhere in their lives, and thus helping the social development of the young person. Even some Marxist historians have credited 19th-century Sunday schools with empowering the working classes. ...read more.

The Albemarle Report is sometimes presented as heralding a golden age of youth work, where workers and trainers were confident in their actions, where resources flowed into buildings and staffing, and where there was some intellectual debate about theory and practice. (Smith M, 2002) The Albemarle was a high point within the development of services for all young people. It sanctioned young peoples' right to question social ideas. The report highlighted four main areas for the youth service; professional training, more youth centres to encourage social interaction, projects to work with the unattached youth (detached work) and to build on strengthening the relationship between the voluntary and statutory services. Significantly another move forward for the development of young people. A Committee was lined up to review the work of the Youth Service in England and Wales. For some years there had been various campaigns in the media (particularly the popular press) around what was perceived as an emerging 'youth problem'. With what appeared to be a significant growth in adolescent and teenage delinquency; the emergence of a more obviously 'teenage' culture linked to fashion and music was recognised. Just a few months prior to the appointment of the Committee there were riots in Nottingham and London (especially in Notting Hill and Brixton) centred around 'race' - and involving large numbers of younger people. Unsurprisingly given all the media attention, there was also growing disquiet among MPs and concerns about the government's performance (Smith, M, 2002) One disturbance in particular was the racially motivated Notting Hill and St Ann's Well Road riots, this made youth culture headlines. ...read more.

(Every Child Matters 2003). We then saw the Youth Matters 2005. The aim was to organise services around the needs of young people, their parents and carers, rather than around organisational or professional silos, is critical. This must apply equally throughout the teenage years, as it does for younger ages, as the risks and challenges young people face evolve. (Youth Matters 2005) The history of youth work has followed changes within the political beliefs of the Government at that time. From the very beginning, the youth service development seemed to be a struggle and its focus seemed to be based on meeting the needs of young males. Throughout, various people have tried to play a role within society's needs, which have continually changed to try to meet the needs of young people. The decline and growth of the welfare state influenced and affected the service and the young person's development at each turn, with new policies replacing old policies, again having their affect on the service. We see secondary socialisation moving forward due to the participation of external agencies and support for the service and young people. Inclusion within society provides a way for a young person to earn social status through participation within the youth service. Considering current policies such as Every Child Matters (2003) and Youth Matters (2005) there has been notable changes to help the development of young people through an array of different services available, which includes the youth service. There is now monitoring and evaluating in place through current policies and the recording of progress of a young person which helps give site to the overall development of a young person from a very early age as well as regulating the service. ...read more.