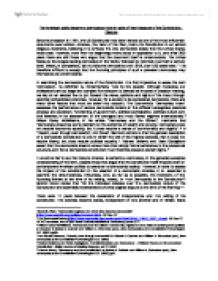 The American polity became a democracy more in spite of than because of the Constitution. Discuss

The American polity became a democracy more in spite of than because of the Constitution. Discuss Since its inception in 1787, the US Constitution has been viewed as one of the most influential documents ever written. America, the 'land of the free', holds its Constitution in an almost religious reverence, believing it to embody the very democratic ideals that the United States holds dear. However, even from its beginnings many stood in opposition to it, and after 200 years there are still those who argue that the document itself is undemocratic. The United States is the longest lasting democracy in the World, followed by Denmark over half a century later. Britain, in comparison, did not become democratic until 1918, over 100 years later.1 It is therefore difficult to accept that the founding principles of such a prevalent democracy may themselves be undemocratic. In examining the democratic nature of the Constitution it is first imperative to asses the term 'democracy'. Its definition is, fundamentally, 'rule by the people'. Although nowadays our civilisations are too large and complex for everyone to directly be involved in decision making, we rely on an elected few to put forward the views, opinions and rights of the many through carefully orchestrated channels. ...read more.

It also prevents majorities from abusing power by frustrating its use. 'Factionalism', the tyranny of the majority, had plagued state governments, and the founders were convinced the same mistakes would not be made. As the causes of factionalism; essentially unequal distribution of wealth, are impossible to remove, the results must instead be combated. The founders therefore created a system of competition, a pluralist system in which one majority could never dominate permanently. The federal system also offered another 'check'; one level of government could act as a check on the other, ensuring that the diverse interests of such a large country can all be take into account. Although there was much argument over the extent of popular participation, it was eventually agreed that "no government could long subsist without the confidence of the people"10 Smaller states would not accept proposals that would give too much power to larger states, such as directly elected president and senators. Therefore only the House of Representatives would be directly elected, although even this was opposed by Massachusetts and Connecticut. All these carefully orchestrated plans certainly intimate a carefully considered, representative and revolutionary system. Separation of powers and federalism both ensure a level of fluidity, preventing stagnation and corruption amongst governments. ...read more.

The Founders debated including the process in the Constitution, yet it was voted down. 17 In conclusion, it is impossible to state directly whether or not the Founders intended to create a truly democratic republic. It would be na�ve to assume that each of the Founders acted entirely in the public interest, with no thought to their own motives, yet investigation into the Framers conducted in the 1980s suggested that they acted more in the interests of their states than for their own personal benefit. 18 Although the Constitution is in some ways very inflexible, its survival for over 200 years with such dramatic changes in social, political and economic spheres suggests with minimal amendments suggests that it certainly has democratic elements. Although alterations have taken place to ensure democratic ideals are preserved, the nature of America after the writing of the Constitution resembles today's democracies far more than any other nation at the time. Indeed, it provided an example that has been imitated across the globe. Aspects of the Constitution that could be seen as undemocratic have been altered, for example, Senators are now directly elected. The Constitution provided a building block upon which a successful democracy could operate, and with the addition of the Bill of Rights, provided a framework for a democratic society based on equality, liberty and popular participation. ...read more.