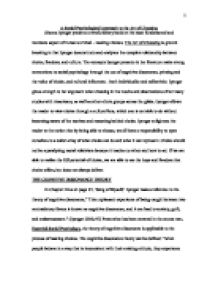 The Art of Choosing. Sheena Iyengar presents a revolutionary book on the most fundamental and mundane aspect of human survival making choices. The Art of Choosing is ground breaking in that Iyengar deconstructs and analyzes the complex relations

A Social Psychological Approach to the Art of Choosing Sheena Iyengar presents a revolutionary book on the most fundamental and mundane aspect of human survival - making choices. The Art of Choosing is ground breaking in that Iyengar deconstructs and analyzes the complex relationship between choice, freedom, and culture. The concepts Iyengar presents in her literature make strong connections to social psychology through the use of cognitive dissonance, priming and the value of choice, and cultural influences - both individualist and collectivist. Iyengar gives strength to her argument when drawing in the results and observations of her many studies with Americans, as well as other ethnic groups across the globe. Iyengar allows the reader to view choice through a cultural lens, which one is not able to do without becoming aware of the motives and reasoning behind choice. Iyengar enlightens the reader to the notion that by being able to choose, we all have a responsibility to open ourselves to a wider array of what choice can do and what it can represent. Choice should not be a paralyzing moral relativism because it teaches us when and how to act. If we are able to realize the full potential of choice, we are able to see the hope and freedom that choice offers, but does not always deliver. THE COGNITIVE DISSONANCE THEORY In Chapter three on page 97, 'Song of Myself,' Iyengar makes reference to the theory of cognitive dissonance," This unpleasant experience of being caught between two contradictory forces is known as cognitive dissonance, and it can lead to anxiety, guilt, and embarrassment." (Iyengar 2010; 97) From what has been covered in the course text, Essential Social Psychology, the theory of cognitive dissonance is applicable to the process of making choices. The cognitive dissonance theory can be defined: "when people behave in a way that is inconsistent with their existing attitude, they experience discomfort. ...read more.

The Value of Choice If choice can be affected by primes, it is important to understand how choice is valued. The value of choice comes from our ability to perceive differences between things that are not all that different. The process of choosing can be confusing, difficult, constraining and even suffocating. This is ironic because having the ability to choose is symbolic to freedom. However, choice is not viewed the same by all. Choice can represent the opposite for people who are not conditioned to choose and are insufficiently prepared to make independent choices. Choice is more attractive in theory than in practice which Iyengar made clear in her interviewing of Eastern Europeans on page 66 of Chapter two, ' A stranger in strange lands.' Iyengar interviewed residents of formerly communist countries and quickly discovered that Eastern Europeans were culture shocked by choice. When some of the respondents were asked what images or words they associate with choice, some described choice as fear, dilemma, too much, unnecessary, and artificial. North Americans however, are trained to spot insignificant and minute differences among our options. We value choice so much that we believe that we should be able to have limitless choice at all times. Limitless choice actually leads to discrepancies among the choices we make because we tend to over analyze the abundant options and are inevitably affected by the external influences that surround us. CULTURAL INFLUENCE: COLLECTIVIST AND INDIVIDUALIST A culture's view of choice affects task performance, decision-making, and ultimately an individual's happiness. Iyengar brings to light the ways in which geography, religion politics, and demographics shape the way people perceive themselves and their individual role within society. "The stories of our lives, told differently in every culture and every home, have profound implications for what and why we choose, and it is only by learning how to understand these stories that we can begin to account for the wonderful and baffling differences among us." ...read more.

Meanwhile, the Asian-American children performed best when they believe their mothers chose for them. This study of Anglo-American and Asian-American children is relative to cognitive dissonance in the sense that first generation children were greatly affected by their parents. They connected what their parents told them with forming community. This is most likely a child of a collectivist upbringing such as in Asian cultures. If the children had defied what their mothers had said, they would have experienced cognitive dissonance. Priming takes effect here in the sense that the children's attitudes could be measured by how much influence their mother has on them. The productivity and willingness of the child to please their mothers predicted their results when they believed their mothers were involved. Meanwhile, the Anglo-American children's reluctance when they found out their mothers had been consulted, is an indicator of how they would perform in the study. Sheena Iyengar's representation of choice and humanity is intriguing, thought provoking and revolutionary. This book is not necessarily controversial, because it is logical and explorative. The only critique that can be made is that Iyengar favours exploration over conclusion. The book is somewhat open ended and offers few explicit lessons. Iyengar admits that choice is an innate and basic desire that lives inside every human being. However, humans also have a strong desire to create meaning - nobody wants to live a life without meaning, which would leave nothing to mark their existence on Earth. Choice is used as an instrument behind meaning; therefore they are interconnected and simultaneous. Humans use choice definitively to construct our identities and our choices are determined by the meanings we select as the driving force behind them. In the prologue of the book, Iyengar provides seven truths about choices that we can use to navigate how we make meaningful choices, the last one being the most powerful as it reiterates the title of the book: "balancing hopes, desires, and an appreciation of the possibilities with a clear-eyed assessment of the limitations: that is the art of choosing." (I, p. ...read more.