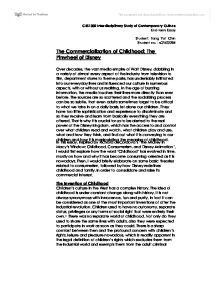 The Commercialization of Childhood: The Pinwheel of Disney

The Commercialization of Childhood: The Pinwheel of Disney Over decades, the vast media empire of Walt Disney, dabbling in a variety of almost every aspect of the industry from television to film, department stores to theme parks, has undeniably infiltrated into our everyday lives and influenced our culture in numerous aspects, with or without us realizing. In the age of bursting information, the media touches their lives more directly than ever before. The sources are so scattered and the socializing process can be so subtle, that even adults sometimes forget to be critical to what we take in on a daily basis, let alone our children. They have too little sophistication and experience to discriminate and so they receive and learn from basically everything they are offered. That is why it is crucial for us to be alerted to the real power of the Disney kingdom, which has the access to and control over what children read and watch, what children play and use, what and how they think, and find out what it is conveying to our children and how it is manipulating the meaning of childhood. In this essay, inspired by Richard deCordova's 'The Mickey in Macy's Window: Childhood, Consumerism, and Disney Animation', I would first explore how the word 'Childhood' has evolved in time, mostly on how and why it has become consuming-oriented as it is nowadays. Then, I would briefly elaborate on some basic theories related to consumerism, followed by how Disney redefines childhood and family, in order to consolidate and raise its commercial interest. The Invention of Childhood Children's culture in the West has a complex history. The idea of childhood is under constant change along with history. ...read more.

and how a family should be that empower Disney as a paramount yet somehow neglected ideological institution in retelling the norms of the society as well as inventing meanings for the other existing social superstructure. Despite the many criticisms parents often make of the media, far more parents of young children (zero to six years old) think TV "mostly helps" children learn (43%) than think it "mostly hurts" learning (27%) or that it does not affect learning one way or the other (21%). Indeed, a significant proportion of parents believe that various types of educational media are "very important" to children's intellectual development.6 The whole scheme of norms conveying by Disney are accepted and internalized by the general audiences without much less critical reflection than there should be. One of the reasons for that is exactly the company strategy of fusing entertainment and education, which has blurred the boundary between educational public culture and commercial interest of the company. Parents are convinced of the educational value lying within the Disney products and animation films, therefore are less sensitive of the content and more readily perceive the information being told as positive and righteous. As previously stated on the consumerism, the Disney enterprises have made use of all possible means to implant the ever growing desire to consume in our hearts. In the World of Disney, no one seems to have to work in order to produce. It is said to be "a carousel of consumerism. Money is the goal everyone strives for because it manages to embody all the qualities of their world."7 There is a constant round of buying, selling and consuming, but to all audiences, none of the products involved has required any effort from whoever to make. ...read more.

The well known success of the Mickey Mouse Club can help us to understand how Disney makes use of consumer community to promote the company's interest. The Mouse's Club is a social community that allows children's drama, nature tales and musicals to interact with Disney's own cartoon characters and form a kind of children's variety show. The mouseclubbers themselves, singing the Mouse Club song with their special mouse ears on, provided a sense of organization and belonging, with Mickey as its centre idol. The same marketing strategy is used in many other products of Disney's in a smaller scale, like the above mentioned learning kit of Disney World of English, which also has its own World Family Club15. The community brings all the mouselovers together, generates and consolidates the loyalty to Disney characters and hence its products sharing among the peer culture. The picture drawn here is far from complete, but it does give some sense in how children was recognized, targeted and transformed as consumers through the use of its ideological power and many marketing strategy by the Disney Company. In their relentless pursuit, all the threads of our daily life have woven into the fabric of our world of goods. Given that merchants' attentions are increasingly focused on childhood, it is reasonable to expect that the concern with children's consumerism will grow stronger and stronger. As to redress the situation, we have to acknowledge the marketplace as a part of the contemporary socialization in how children learn the roles, attitudes and sentiments that reinforce the consumer culture, no matter how the subject company advertises itself as the place that dreams come true. ...read more.