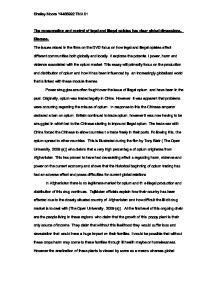 The consumption and control of legal and illegal opiates has clear global dimensions. Discuss

The consumption and control of legal and illegal opiates has clear global dimensions. Discuss. The issues raised in the films on the DVD focus on how legal and illegal opiates affect different communities both globally and locally. It explores the potential power, harm and violence associated with the opium market. This essay will primarily focus on the production and distribution of opium and how it has been influenced by an increasingly globalised world that is linked with these module themes. Power struggles are often fought over the issue of illegal opium and have been in the past. Originally, opium was traded legally in China. However it was apparent that problems were occurring regarding the misuse of opium. In response to this the Chinese emperor declared a ban on opium. Britain continued to trade opium, however it was now having to be smuggled in which led to the Chinese starting to impound illegal opium. The trade war with China forced the Chinese to allow countries to trade freely in their ports. ...read more.

explains how the drug has affected his life and describes the feeling of being socially excluded and the desperation he felt for the drug. This might raise the debate asking whether there is actually a solution whereby no party has to suffer harm. In addition to the harvesting of these crops is the issue of drug trafficking which is also seen to be a good livelihood in an area of poverty. Smugglers can provide better pay than the government. These are both issues that cause potential harm in regards to addicts and the misuse of drugs In relation to drug trafficking is the position of Border officials. They explain how it is a huge task to manage the problem of illegal opium smuggling. There are means of transportation that are hard to monitor and they go on to describe how traffickers smuggle within the cover of the mountains either on foot or with the use of donkeys (The Open University, 2009, (a)). Furthermore it is apparent that there is a big corruption problem amongst State officials in certain positions of power. ...read more.

Evidence is explored regarding the case of OxyContin (The Open University, 2009 (a)). It is explained how the illegal advertising of this drug and the claims that it was less addictive resulted in a lot of deaths. It highlights how drug dependence and addiction is not just present in the illicit market and has both local and global connections within the legal market also. To conclude, it is apparent that whether it is a country, a pharmacist or a dealer on the street, opium is distributed through similar chains and all involved are capable of causing harm to any one person. An influential opinion of much interest in the course material was that of Deborah Small (The Open University, 2009 (a)). She discussed how as a global world we are always going to be involved in global trade and as a result there will always be global drugs. If there's trade there will be drugs. This is a powerful and believable explanation of how legal and illegal opiates have clear global dimensions and why power, harm and violence are associated with the drug market. ...read more.