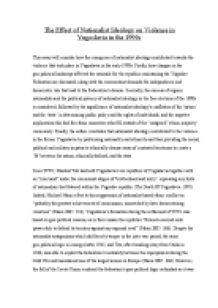 ﻿The Effect of Nationalist Ideology on Violence in Yugoslavia in the 1990s This essay will consider how the emergence of nationalist ideology contributed towards the violence that took place in Yugoslavia in the early 1990s. Firstly, how changes in the geo-political landscape affected the rationale for the republics maintaining the Yugoslav Federation are discussed, along with the concomitant demands for independence and democratic rule that lead to the Federation?s demise. Secondly, the success of organic nationalists and the political potency of nationalist ideology in the free elections of the 1990s is considered; followed by the significance of nationalist ideology?s conflation of the ?nation? and the ?state? in determining public policy and the rights of individuals, and the negative implications this had for ethnic minorities who fell outside of the ?imagined? ethnic-majority community. Finally, the author concludes that nationalist ideology contributed to the violence in the former Yugoslavia by politicising nationality and ethnicity and thus providing the moral, political and military impetus to ethnically cleanse areas of contested territories to create a ?fit? between the nation, ethnically defined, and the state. Since WW2, Marshal Tito had held Yugoslavia?s six republics of Yugoslavia together with an ?iron hand? under the communist slogan of ?brotherhood and unity?: repressing any hints of nationalism that festered within the Yugoslav republic (The Death Of Yugoslavia: 1995). Indeed, Michael Mann refers to this suppression of nationalist-based ethnic conflict as ?probably the greatest achievement of communism, unmatched by later democratising countries? (Mann 2005: 354). Yugoslavia?s formation during the settlement of WW1 was based on geo-political reasons, as in their unison the republics ?formed a second-rank power able to defend its territory against any regional rival? (Mann 2005: 366). ...read more.

The idea of the ?nation? that was propagated and voted for was ?imagined? in the sense that it was impossible for all members of each respective Yugoslav republic to acquaint themselves with each other, yet, despite the inequality and exploitation that may exist in each nation, the idea of the nation came to be imagined as a ?deep, horizontal comradeship? (Anderson 2006: 7) amongst its members. The state apparatus, embodying this identity (Gellner 2006: 4), thus exercises sovereignty by enforcing the borders and maintaining sovereign order within the ?inherently limited? nation state, as, indeed, ?if there is no state, one cannot obviously ask whether or not its boundaries are congruent with the limits of nations? (Gellner 2006: 4). Thus, nationalist ideology?s creation of an ethno-nationalist creed determined that formerly Yugoslav citizens living in a republic of which they did not form part of the ethnic (nationally determined) majority, along with any members of the majority who might try to support rights for the minorities (Hayden 1996: 790), were ?national enemies?, or ?others?. The presumption of the nationalist politics within the Yugoslav republics was that ?various Yugoslav peoples could not live together? (Hayden 1996: 788), thus the ?Yugoslav idea? of an imagined Yugoslav community living together under a common state for the South Slavic people was considered abnormal. However, as Hayden and Petrovic document, from 1953 to 1981 almost all of the territories of Yugoslavia became increasingly heterogeneous (Petrovic 1987 cited in Hayden 2006: 788). Furthermore, accompanying this peaceful decline in the ethno-national majorities of the republics, there was also an ?increase in the rates of inter-marriage between members of different national groups? (Hayden 1996: 788) ...read more.

As Yugoslavia collapsed ?the Serb and Croat leaders in Bosnia proclaimed their own self-determining regions within the republic (that) quickly became quasi-states, closely linked to Serbia and Croatia, respectively, and were independent of the supposedly sovereign government of Bosnia-Hercegovina in Sarajevo? (Hayden 1996: 792). Thus, as in Croatia, nationalist ideology was the driving force towards the partitioning of Bosnia-Hercegovina into regions that were meant to be ?ethnically pure? (Hayden 1996: 792). To conclude, this essay has established that nationalist ideology contributed to the violence in the former Yugoslavia by politicising nationality and ethnicity and thus providing the moral, political and military impetus to ethnically cleanse areas of contested territories to create a ?fit? between the nation, ethnically defined, and the state. The demand for democracy in each of the republics to replace the unwanted communist rule of the Yugoslav Federation lead to the drive for independence and enabled the political will for the creation of individual sovereign nation-states to prosper. In effect, self-determination and autonomous governance, afforded by sovereignty and driven by nationalist ideology, brought on the civil wars and the ethnic cleansing that ensued (Hayden 1996: 792); with ethnic cleansing coming to represent a ?manifestation of the incompatibility of the objectified or reified cultures at the base of the several nationalistic enterprises with the living cultures of the area? (Hayden 1996: 796). Essentially, the violence concerned the ?forced unmixing of peoples whose continuing co-existence was counter to the political ideologies that won the free elections of the 1990s? (Hayden 1996: 783) and demonstrated the ?brutal negation of social reality in order to reconstruct it? (Hayden 1996: 783). ...read more.