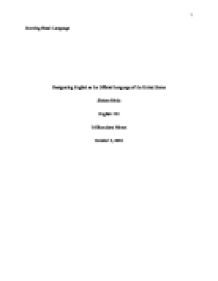 Running Head: Language Designating English as the Official Language of the United States Shakea Ricks English 122 Trillium Sara Hinton October 3, 2010 Designating English as the Official Language of the United States English is spoken by the vast majority of the population of the United States. It serves as the language in which most government business is carried out. English can certainly cause enough differences to have occasional misunderstandings, usually surrounding slang or region dialect differences. In some instances it should be called the language of survival. In his essay, "If Black English Isn't a Language, Then Tell Me What Is," James Baldwin defines language by pointing to its unparalleled power. He writes, "Language is also a political instrument, means and proof of power. It is the most vivid and crucial key to identity (Baldwin, 2009). Language conflicts have come and gone throughout American history, but language has never been as big of an issue in the United States for as long a time as in the past 20 years. This paper will show how the English has affected certain cultures, and how non English speaking citizens (as well as immigrants that do speak a little English) how it affect non English speaking citizens in certain ways, and how the fact that they do not speak English affects the United States. ...read more.

In order to gain citizenship, they have to know proficient English. They want full possibilities when they become a citizen, from a high paying job, to being able to run for congress, even being able to vote, then they should at least be able to speak English. They get jobs in the country, and people that are citizens here and speak decent English can't even get those jobs. Companies know most immigrants are willing to accept less pay for most work. Ballot Printing Costs from several states: Alabama Less than 30� Colorado 29� to 50� Arizona, Cochise City 28� Iowa, Chickasaw Co. Less than 10� Arizona, Maricopa 28� Minnesota 14� to 17� Arkansas 27� Vermont 22� California 18 inch - 40�, 11 inch - 31� Washington 31� Price Quote for Schenectady County (New York) Above is a quotation obtained from Dayton Legal Blank, a certified ballot printer in Ohio, to supply optical scan ballots for Schenectady County. The price quoted is 29� per ballot, not including shipping and taxes. This quote assumed a full face ballot (an example of a 2004 New York City optical scan ballot for absentee voters was provided as an example). It also assumed that for each of Schenectady's 80 Election Districts, there would be down ballot differences for local races, so there would be a total of 80 different ballot styles. ...read more.

The immigration law in Arizona is a great example of how one thing can divide or cause a major issue in one country. This topic is important, because it can go so many ways. Having an official language can change the way we interact with one another. Hopefully, the language crisis for many Americans will trigger a merger of various disciplines to craft long range solutions. In the meantime, the future American language requires collaborative effort by all sectors: community, academic, economic and political. REFERENCE PAGE Aubry, Larry. Sentinel. Los Angeles, CA. Mar 6, 2003. P. A7 Ebonics: Black Students still Awaiting Equity Baldwin, James. "If Black English Isn't a Language, Then Tell Me, What is?? Across Cultures, Eds. Sheena Gillespie and Robert Singleton. Boston: Allyn and Bacon, 1999. 128-131. Hartman, Andrew. (2005, May). Language as Oppression: The English-Only Movement in the United States. Poverty & Race, 14(3), 1. Retrieved September 27, 2010, from ProQuest Central. (Document ID: 875232251). Mount, Steve. "Constitutional Topic: Martial Law." USConstitution.net. 30 Nov 2001. http://www.usconstitution.net/consttop_mlaw.html (3 Dec 2001). Retrieved September 27, 2010 from www.UsConstitution.net Navarrette, Ruben. (2007, December 9). The right to speak Spanish. Daily Breeze. Retrieved September 27, 2010, from ProQuest Newsstand. (Document ID: 1395676081). New Yorkers for Verified Voting, "Paper Ballot Costs and Printing," 2005 http://nyvv.org/reports/PaperBallotPrintingCosts.pdf. Retrieved September 27, 2010 Schildkraut, D.J. (2001). Official-English and the states: Influences on declaring English the official language in the United States. Political Research Quarterly, 54(2), 445-457. Retrieved September 26, 2010, from Research Library. (Document ID: 75495432). ?? ?? ?? ?? Official Language 2 1 ...read more.