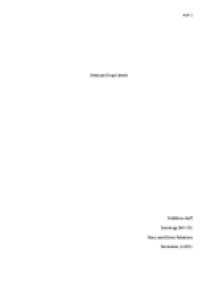 The Growth in Power of the Mexican Drug Cartels

﻿Huff Mexican Drug Cartels Matthew Huff Sociology 240 CCE Race and Ethnic Relations December, 6 2011 The past several years have been marked by an increase in immigration from our southern neighbor Mexico. Many Mexican people are living in constant fear of the established criminal organizations that surround the social and economic spheres of their lives. Some immigrants come to the United States in search of job opportunities to support their family; others flee because they fear for their lives and the lives of their families; still others come to America as ?mules? moving illicit drugs and other paraphernalia across the border with the intent to engage in criminal activity. Since the beginning of drug war in 2006 an estimated 38,000 cartel-related killings have occurred in Mexico, an estimated 12,000 occurred during 2010 alone (Hernandez, 2011). The fall of the old style of government, the rise of democracy and the proclaimed war on drugs are the three main factors that lead to the extreme spike of violence and crime throughout Mexico. Shortly after President Felipe Calderon was elected into office in December of 2006 he announced the start of an ongoing war against drugs and cartels in his nation. The angered cartels reacted violently to the ?new? government interfering with their established drug trafficking routes. The territory of the drug cartels expands across most of the nation?s land; these territories are in constant fluctuation due to turf wars between cartels that change control over certain areas on the map. ...read more.

The citizens have lost faith in their judicial system due to such corruption. At the same time many of the municipal police departments lack the technology and means to solve murder cases and other crimes. Nevertheless statistics show that 2/3 of the Mexican public support the current President Calderon?s efforts (O?neil, 2009) to end organized crime and diminish the effect of drug cartels. President Calderon has been persistent in his fight against the Cartels both on the border with the United States, and throughout his country. Mexico?s growing middle class is a glimmer of hope for the diminishment of drug cartel violence. The middle class Mexicans are able to make money working in small businesses thus enabling them to purchase homes, automobiles, and some send their children to college. Education and a strong force of middle class workers is exactly what Mexico needs in order to fix their dire situation. The Mexican democracy is focusing on long term goals such as collecting taxes, running schools, repairing roads, paying salaries, and supporting large social and civil programs. Such ideals mean that Mexico and the United States are becoming more aligned with each other. On a global scale it is good to have a neighbor that can relate to economic and social patterns as well exchange imports and exports expanding the markets of both Mexico and the United States. There are four main cartels within Mexico, the Juarez, Tijuana, Gulf, and Sinaloa. ...read more.

A note written next to her expressed that this murder was retaliation for her postings on a social network. The note was signed with ZZZZ signifying the cartel local to the area, the Zetas. Her head was found placed on a large stone piling nearby?Marisol Castaneda, the manager for the Nuevo Laredo Newspaper. Apparently Sra. Castaneda was executed in such a way for something that she had posted on a social network (Facebook, Twitter etc.) that involved the Gulf Cartel (Stevenson, 2011). Horrible murders such as this are being committed daily in certain areas of Mexico. Violent cartel members and sicarios show no shame or mercy while terrorizing other Mexican citizens. The steep increase of Mexican immigration to the United States is happening for many deeply seated reasons. Some immigrate for fear of being killed by the cartels, many for an opportunity to work, and still others immigrate with the intent to take part in organized crime. Immigration is an integral part of America today, and there are many advantages as well as disadvantages to the increase in Mexican immigrants. ?In 2010 the U.S. provided just under 180,000 Visas to Mexicans for labor and family unification purposes, this number is equivalent to 2.7% of the undocumented Mexican-American population? (Germano, 2009). It is as if masses of people are leaving the comfort of their homes and fleeing to a new country?a sociological study in itself. The joint effort of the two neighboring nations can create a less violent Mexican society where a middle class and democracy can flourish peacefully. ...read more.