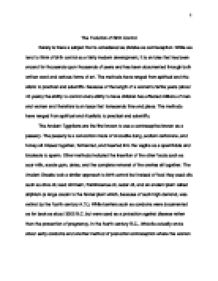 The History and Evolution of Birth Control

The Evolution of Birth Control Rarely is there a subject that is considered as divisive as contraception. While we tend to think of birth control as a fairly modern development, it is an idea that has been around for thousands upon thousands of years and has been documented through both written word and various forms of art. The methods have ranged from spiritual and ritualistic to practical and scientific. Because of the length of a woman's fertile years (about 40 years) the ability to control one's ability to have children has affected millions of men and women and therefore is an issue that transcends time and place. The methods have ranged from spiritual and ritualistic to practical and scientific. The Ancient Egyptians are the first known to use a contraceptive known as a pessary. The pessary is a concoction made of crocodile dung, sodium carbonate, and honey all missed together, fermented, and inserted into the v****a as a spermicide and blockade to sperm. Other methods included the insertion of the other foods such as sour milk, acacia gum, dates, and the complete removal of the ovaries all together. ...read more.

Animal membranes/ intestines and linen were also used as a reusable contraceptive sheath and packaged in a paper envelope for one to carry around. In the 1840's, disposable condoms were able to be mass produced because of inverter Charles Goodyear's vulcanization of rubber. This meant that condoms could be made cheaper and were much more readily available to the public. Sadly, in the 1870's the US Congress passed the Comstock Act (named after anti-obscenity crusader Anthony Comstock) made it illegal to send any kind of contraceptive device or information via the mail. More than 25 states passed similar law, Connecticut being one of the most stringent in saying that "Any person who will use any drug, medicinal article or instrument for the purpose of preventing conception shall be fined no less than 50 dollars or imprisoned for no less than 60 days nor more than one year or be both fined and imprisoned." Yet another form of contraceptive that is still used today is a sponge. First used in Egypt, it spread rapidly and these sponges were made of a variety of materials and were usually soaked in some kind of an astringent agent such as lemon juice or vinegar to act as a spermicide. ...read more.

All that is needed is the education of all people so that these methods may be used effectively and correctly. It is clear that, throughout history men and women have gone to great length to control when and how they reproduce. It has been a concept for thousands of years and is one that transcends time and space and with all the advancements in the field, it is a blessing that we live in a society that has control over our reproductive system that our ancestors and even some contemporaries lacked. There are still many women and men who lack access to reliable forms of contraceptives. It should be our quest to reach out to people in all walks of life and provide them with the protection they deserve: it is a step towards their freedom and a step away from the problem of over-population and depletion of natural resources. As contraceptive pioneer Margaret Sanger said in Morality and Birth-control, "Birth control is the first important step woman must take toward the goal of her freedom. It is the first step she must take to be man's equal. It is the first step they must both take toward human emancipation. ...read more.