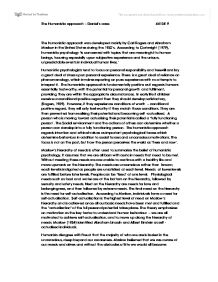 The humanistic approach was developed mainly by Carl Rogers and Abraham Maslow in the United States during the 1950's. According to Cartwright (1979), humanistic psychology 'is concerned with topics that are meaningful to human beings, focusing especially upon subjective experience and the unique, unpredictable events in individual human lives.' Humanistic psychologists tend to focus on personal responsibility and freewill and lay a great deal of stress upon personal experience. There is a great deal of reliance on phenomenology, which involves reporting on pure experience with no attempts to interpret it. The humanistic approach is fundamentally positive as it regards humans essentially trustworthy, with the potential for personal growth and fulfilment, providing they are within the appropriate circumstances. In early life if children receive unconditional positive regard then they should develop satisfactory, (Rogers, 1959). However, if they experience conditions of worth - conditional positive regard, they will only feel worthy if they match those conditions. They are then prevented from realising their potential and becoming self-actualised. A person who is moving toward actualising their potential is called a 'fully functioning person'. The Social environment and the actions of others can determine whether a person can develop into a fully functioning person. The humanistic approach regards intention and ethical values as important psychological forces which determine behaviour in addition to social forces and unconscious motivations. ...read more.

A bigger gap has now developed between his self-concept and his ideal self, as he now sees himself as incapable, even though he has been in charge of much more important tasks in the past. His recent divorce is likely to also be a factor of this; he may view himself as a failure in regards to his failed marriage, and now with his job. None of this would help Daniel's self-concept, and self-esteem, all adding to the stress he is facing. According to the science council, "science is the pursuit of knowledge and understanding of the natural and social world following a systematic methodology based on evidence." The humanistic approach is not based on scientific methods, but on phenomenology in which individuals report on their own conscious experiences, with no attempt to interpret it. According to Maslow (1968), "The uniqueness of the individual does not fit into what we know of science. Then so much worse for that conception of science. It, too, will have to endure re-creation." Rogers (1959) held a similar view to Maslow, according to him, the phenomenological approach based on self-reports of conscious experience allows us to understand more about the meaning of people's experience than does the traditional scientific approach favoured by the behaviourists. Characteristics of the humanistic approach has lead theorists from other approaches to say that the humanistic approach is not scientific at all, as many psychologists, and most scientists believe that behaviour can only be understood objectively (measured). ...read more.

A final issue with using Roger's self-concept theory to help explain and develop behaviour is that people may possess a number of self-concepts, which are used in many different situations and environments, therefore it may be unrealistic to just refer to one as means of assessing individuals. Although the humanistic approach clearly has a great deal of value as a means for understanding people's behaviour and has also contributed lots when applying it to the real world, behaviour can often be misinterpreted using a humanistic outlook. Behaviour can be the result of many different motivators. For example, according to Maslow's hierarchy of needs, a person with a low paid, menial job is merely trying to make some money to put food onto the table - meeting their basic physiological needs. However the reason the person does this job may due to the reason that in fact they are meeting their belongingness and love needs, as perhaps they are very happy with the good set of colleagues that they work with. If offered a promotion, they may reject it, because although they would be earning more money, they may not be working alongside the people they have formed close relationships with and therefore fall back a level and become unhappy individuals. This example can show us how ambiguous the humanistic approach can sometimes be when trying to understand people's behaviour. Psychoanalytic critics have argued that because humanistic psychology emphasises on wholeness and optimism, it has downplayed the more tragic and painful dimensions of life, such as emotional conflict. ...read more.