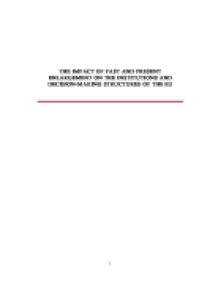 THE IMPACT OF PAST AND PRESENT ENLARGEMENT ON THE INSTITUTIONS AND DECISION-MAKING STRUCTURES OF THE EU In this essay paper the consequences of the different stage enlargements upon the institutions and their decision- making would be discussed from a European point of view. There are many studies about the impact of enlargement but most all of them refer indeed to national the perspective. In with work I focus more on the impacts of the Lisbon treaty taking into account the importance and the actuality of the topic as well the importance of one of the biggest enlargements of the European Union in 2004. However, the effects of the past enlargements are also discussed. Although there are plenty of hypothetical research done of the impacts that may cause the eastern largest enlargement, there is still a difficulty while treating this subject that it is certainly hard to deduce the real impact of the last 'big ban' enlargement (Hagemann and De Clerck-Sachsse, 2007), as the dimensional impact need more time and more investigation to come to light. The enlargement of the European Union has always been treated in controversy, and has been slowly getting bigger from six members in 1958 to nine in 1973, ten in 1981, twelve in 1986, fifteen in 1995 and finally 25 in 2004. ...read more.

In other words, under QMV, enlargement increases the availability of minority blocking coalitions that want to kill a given proposal more than it increases the availability of majority winning coalitions that want to adopt a given proposal". In his work he explains that the convergence of member states preference and the formation of 'relatively limited number of connected coalition' in the Council as the main factor of the satisfactory functioning of the decision-making after the first enlargement. It is not noticed an increase of the disagreements in the Council meeting, however an increase in the level of opposition did. The quantity of legislation adopted by the Council has decreased since the enlargement. The study specify in almost thirty months, from December 2001 to May 2004 enlargement, the Council adopted a total of 474 acts, and 139 of them were passed in the very few months before the enlargement. This is suggested because more legislative work should have been done before the date that the new member states could start exercising their legal rights. When looking in to the area of policy making, there have been striking findings of an important change in the procedure of the Council meeting . ...read more.