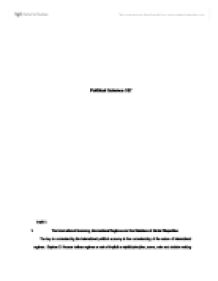 Political Science 207 PART I 1. The International Economy, International Regimes and the Relations of Global Disparities The key to understanding the international political economy is the understanding of the nature of International regimes. Stephen D. Krasner defines regimes as sets of implicit or explicit principles, norms, roles and decision making processes around which actors expectations converge in a given area of international relations. In addition to Krasner, Kal Hosti proposes that regimes exist when the following three factors are present: Firstly, perceptions of community interest must be apparent (such as state interests). Secondly, a notion of a common destiny for the regime and the allocation of where the regime will fit within the international system are critical. Lastly, there must be a clear sense that self-restraint is necessary to achieve a common goal among international actors. Regimes are, however, not the same as international law or international organizations. These are simply examples of one of the elements that make up part of the regime. Regimes are more flexible than law. Law comes out of legal principles; regimes are explicitly political creations. Oran Young further defines regimes as containing the following functions: Firstly, that they are comprised of set standards that are measurable and quantifiable, for example percentage of greenhouse gas emissions allowable. Secondly, they must set obligations that require enforcement potential from non-governmental organizations (NGO's) or international governmental organizations (IGO's). Thirdly, in some instances, they must allocate resources effectively, for example fisheries regulations regimes should encompass some form of quantitative quota. Finally, regimes must provide explicit prohibitions, i.e. what not to do. For example, this may include the Nuclear Non-Proliferation Treaty, which sets out prohibitions on the atmospheric testing of nuclear bombs. Regimes are also recognized as interactions between states and between many other actors, whom all play an important role in determining state structure and behavior. These interactions result in the culmination of regimes. According to Young, regimes originate in three ways: Firstly, they result from the act of explicit bargaining. ...read more.

They are as follows. Firstly, there is the disaster relief which is assistance offered during times of disaster, such as earthquakes or landslides. This form of aid can be problematic, for example Canadian powdered milk donations to lactose intolerant societies in the past had grave consequences that exacerbated the crisis. Secondly, there is the missionary model, which is designed by agencies and is donor multi-lateral. These methods fund and initiate programs however, they leave soon after, leaving it up to the country to sustain its existence. The problem associated with this is that complexities are often unforeseen until it is too late. For example, the Netherlands assisted an African coastal community by building a fish processing plant that eventually did not have enough electricity resources to sustain its prolonged existence. The result was a defunct fisheries plant. Thirdly, there is the OXFAM model where local people determine their own needs and work on small-scale projects. For example this model may build a school in a needy community and pay locals to build it. These forms of aid are benevolent, however they fail to deal with the fundamental problem- debt. The issues of trade will be briefly discussed here to expose the wealthier states perpetual action that keeps poorer states from progressing. Trade is considered by some as the route to development, to others it is the root to poverty. The problems associated with trade on poorer countries are that most trade is from EDC to EDC, only 24% is from poorer countries. Most of these countries have massive trade deficits already and are heavily dependent on exports of primary product for relative stability. Poorer nations are averaged to be 2.5 trillion dollars in debt. This is 132% of their export earnings. Over the years, poorer countries have paid a total of 292 billion dollars in interest, which is 18% of their export earnings and the result was a debt that barely budged to be paid. ...read more.

are adhered to by global governments and are in some cases binding decisions and agreements, yet, an international organization developed for the purpose of regulating murder and torture has yet to be conceived. If international courts for monetary issues are manageable and successful, then so should a court for humanitarian issues. Monetary issues are complex, as are humanitarian intervention issues. It is difficult to even conceive of institutionalizing universal morals across such a diverse globe. For example, is self-determination more critical than contemporary economic interdependence? Or are the political rights of the individual more vital than the socioeconomic rights of the collective? The concept of human rights is relative to the types of people who are analyzing them; it is not universal. However, certain aspects of the concept must become more universal. The concept will never advance, nor will the concept ever increase to universalize if an effective international system ceases to exist to define the concept more effectively. I can imagine that 500 years ago, the idea of a national court system seemed unfathomable to society, however look at the streamlined effectiveness of the Bar association today in a Canadian society characterized by diversity, pluralistic complexities and cleavages. Do I feel that it is possible to intervene successfully in internal conflicts? As a constructivist, the response depends on the individual who is analyzing; however a more streamlined and universal acceptance of human rights standards has to begin somewhere and can only come from an internationally binding legal institution. Should the international community become active in attempting to assist failed states? Yes! This is possible by way of a judicially independent international court system (no veto power or economic primacy here!), and not by imperial neo-liberal democratization and its materialistic definition of progress. Binding legal documents need to be established and human rights and human wrongs need to be universalized to end the fruitless debates about a critical issue that has yet to be valued for what it is truly worth- human life. 2 ...read more.