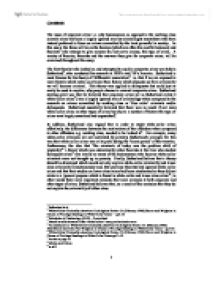 The issue of corporate crime i.e. why businessmen as opposed to the working class commit crime has been a largely ignored area by criminologist researchers who have instead preferred to focus on crimes committed by the least powerful in society..

The issue of corporate crime i.e. why businessmen as opposed to the working class commit crime has been a largely ignored area by criminologist researchers who have instead preferred to focus on crimes committed by the least powerful in society.. In this essay, the focus will be on the theories (which are often few and far between) and theorists1 who attempt to give reasons for, but not to excuse, this type of crime. A variety of theories, theorists and the answers they give for corporate crime, will be examined throughout this essay. The first theorist who looked at, and attempted to explain corporate crime was Edwin Sutherland2, who conducted his research in 1920's and '30's America. Sutherland is most famous for his theory of 'differential association'3 i.e. that if we are exposed to more factors which make us criminal then factors which dissuade us from criminality we will become criminal. This theory was applied to delinquents but could just as easily be used to explain, why people choose to commit corporate crime. Sutherland starting point was that he believed that corporate crime (or as Sutherland called it white-collar crime4) was a largely ignored area of criminology when compared to the research on crimes committed by working class or 'blue collar' criminals and/or delinquents. Sutherland essentially believed that there was as much if not more white-collar crime as other types of crime but due to a number of factors this type of crime went largely unnoticed and unpunished5. In addition, Sutherland also argued that in order to study white-collar crime effectively, the differences between the motivations of the offenders when compared to other offenders e.g. working class, needed to be looked at6. ...read more.

This lead to John Braithwaite and Gilbert Geis25 developed six propositions which they believed helped explain all aspects of corporate crime through the effects of a corporate crime to rehabilitation as a response to corporate crime26which outlined their suggested approach to corporate crime. As mentioned, very little research, has been done on corporate crime and many of the theories suggested above where not designed to explain corporate crime specifically - many of them were designed to explain delinquent crime and have merely been adapted to explain corporate crime to a certain extent. However, quite recently, there has been resurgence in the number of theorists27 who have looked at corporate crime. This has lead to a number of theories being developed which can be described as 'universal theories', in that they can be used to explain/analyse all types of crime. One of these is the 'rationale choice theory' (see below). This theory, can be used to explain not just corporate crime, but also other types of crime as it could be argued that all criminals before deciding whether to commit a crime 'weigh up the pros and cons' and the likelihood of them getting caught. This has lead to a nine variables28, which are used by corporate criminals when deciding whether to commit a crime. These are perceived certainty/severity of formal legal sanctions, perceived certainty/severity of informal sanctions, perceived certainty/severity of loss of self-respect, perceived cost of rule compliance, perceived benefits of non-compliance, moral inhibitions, perceived sense of legitimacy/fairness, characteristics of the criminal event and prior offending by the person. All of these suggest that far from a criminal being irrational and seizing their opportunity when it presents itself, criminals and corporate criminals, especially, probably spent months weighing up the various elements and the likelihood of them being caught and punished. ...read more.

crime in a bid to get a 'quick fix' to their inadequacies, be they social, economic etc. This argument is supported by the quote below, 'Market society promotes violent crime by creating...a state of internal warfare...in which a corresponding ethos of unconcern- of non-responsibility for others well-being...pervades the common culture and interactions of daily life'37 Another element of this theory is that of opportunity. It could be argued that everyone in society has the opportunity to commit a crime of sometime at one time or another, in their lives, but most of the time we let these opportunities pass by. This is where this theory becomes like the rational choice theory, in that they believe that an individual weighs up the potential danger and rewards (as above) of committing a crime and then on balance decides whether to commit the offence or not. The position an individual holds within a corporation will have an impact on not only whether they choose to commit a crime but also the particular crime they commit e.g. fraud, embezzlement etc. So, in conclusion, these are the main theories, which can be used to analyse and explain corporate crime. As mentioned throughout the essay, many of these theories, have not been devised solely as a reaction to and/or explanation of corporate crime. Instead, many of these criminological theories, have been adapted to provide an explanation of corporate crime but these are not always adequate and can lead to gaps, which, no one theory can address, and/or social science explain, a major criticism of many of the approaches. This has, lead to a combination of theories, being used in an attempt to explain corporate crime. More, now than ever, an adequate and all encompassing theory is needed, which addresses the ever-growing problem of corporate crime both nationally and internationally. ...read more.