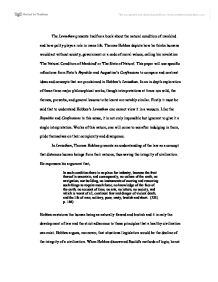 The Leviathan presents itself as a book about the natural condition of mankind and how polity plays a role in mans life.

The Leviathan presents itself as a book about the natural condition of mankind and how polity plays a role in mans life. Thomas Hobbes depicts how he thinks humans would act without society, government or a code of moral values, calling his revelation 'The Natural Condition of Mankind' or 'The State of Nature'. This paper will use specific reflections from Plato's Republic and Augustine's Confessions to compare and contrast ideas and concepts that are proclaimed in Hobbes's Leviathan. In an in depth exploration of these three major philosophical works, though interpretations at times run wild, the themes, proverbs, and general lessons to be learnt are notably similar. Firstly it must be said that to understand Hobbes's Leviathan one cannot view it in a vacuum. Like the Republic and Confessions in this sense, it is not only impossible but ignorant to give it a single interpretation. Works of this nature, one will come to see after indulging in them, pride themselves on their complexity and divergence. In Leviathan, Thomas Hobbes presents an understanding of the law as a concept that distances human beings from their natures, thus saving the integrity of civilization. He expresses his argument that; In such condition there is no place for industry, because the fruit thereof is uncertain, and consequently, no culture of the earth, no navigation, nor building, no instruments of moving and removing such things as require much force, no knowledge of ...read more.

The ability to attain this ultimate happiness is all in creating the environment in which it can possibly take place. In his prophecies this means having a neutral third party to govern humans actions, he calls it a "Sovereign", and to ensure that humans abide by their social contracts and when failing to do so punishing those accordingly. This absolute sovereign would act as peacemaker, a third actor in any confrontation between two subjects who could be trusted to hold power and defend each subject from another or collectively from another state. The sovereign would receive its authority by the collective consent being governed, and therefore being in a sense representing the will of the people the sovereigns' actions are indirectly the actions of the subjects. If the sovereign creates a law, it is the people creating the law, if the sovereign executes a subject, the subject has in fact executed himself. Hobbes portraying that the collective as a whole is stronger than a divided, insecure number of individuals. Insisting on a system be put into place where humans can feel a sense of security, and retreat from the continual fear of a violent death. Again Hobbes assures that no single men are as strong as a collectively governed body; "Whatsoever therefore is consequent to a time of Warre, where every man is Enemy to every man; the same is consequent to the time, wherein men live without other security, than what their own strength, and their own invention shall furnish them withall" (Hobbes, p. ...read more.

stance on the issue of humanistic instinct, arguing that if an individual does not act in the time necessary to preserve themselves than they will be killed. Even then in "The State of Nature" humans are always being threatened, whether it be from a stronger individual, or from weaker ones who have ganged up with other weaker individuals who feel threaten by that particular humans very existence. This is the reasoning behind Hobbes' view that with having a sovereign, "The State of Nature" can be abolished and humans can life without fear of a particularly harsh and short lifestyle followed by a violent death. The lessons to be learned from the Leviathan, the Republic, and lastly the Confessions are vastly debated. Humans can view the explorations of all three works with a plethora of possibilities in mind, but never really explicitly grasp the exact meanings of any of them. But this sense of a constant thought process and re-emergence into the dialogue of all three may very well be their intended purposes. They all do show however that we as humans posses one of the most powerful tools there are, the ability to reason. Socrates does not ever say explicitly what the Good actually is, just as Augustine never exactly says what God is, but the principles are laid down for each individual to acquire the knowledge of what each means to him or herself. The themes of all three works are quite notably rooted in the same tree of thought. 2 ...read more.