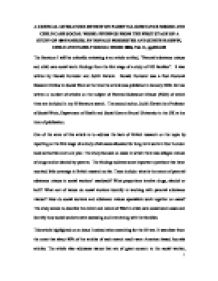 The literature I will be critically reviewing is an article entitled, Parental substance misuse and child care social work: findings from the first stage of a study of 100 families. It was written by Donald Forrester and Judith Harwin.

Social workers are working with large numbers of serious cases involving substance misuse and it is rare for there to be a specialist professional involved. Another area that the article gave cause for concern was that there appeared to be low levels of referrals from certain professional groups. Recent guidance has emphasized the importance of a strong inter-agency framework in response to PSM (Local Government Drugs Forum 1999; Advisory Council on the Misuse of Drugs 2003), yet the research suggests that concerns are often either not being identified or not being referred. The absence of referrals from health visitors and general practioners suggests that substance misuse issues are not being identified and /or referred by community health professionals. The study did not comment on the reasons for this absence of referrals. According to Kroll and Taylor cited in MacGregory 2010, it is been estimated that between 241,000 and 359,000 children in the UK are in the care of problems drug users, with between two and three per cent of children aged less than 16 years living with parents for whom this is an issue (ACMD 2003). ...read more.

which came out that drug-using parents were reluctant to engage with services because they did not want to be separated from their children or feared losing custody of them if their ability to care was questioned (MacMaster 2005). According to Harwin (2008), it would not have been possible to have a special issue on parental substance misuse and young people's behaviour ten years ago. How to deal effectively with substance misuse is a major challenge for practitioners and policy makers. Harwin also emphasised that, from a child's point of view it makes very little difference whether parents misuse alcohol or illegal drugs-the damage can be equally profound in both circumstances. Harwin, (2008) criticised that there is no room for complacency and also a considerable amount of basic information is still missing, which is vital for service planning and understanding and addressing policy trends. She argued that no data are collected on the numbers of care proceedings cases that involve parental substance misuse instead survey evidence or locally collected administrative data. This critique I equally agree with and this has resulted in lack of research in PSM in Britain. ...read more.

A good literature review of a study looking a parental substance misuse and child care social work. The writing style was generally good, allowing the reader the easily follow the key points drawn out from the article. It was good to see that the writer identified the authors