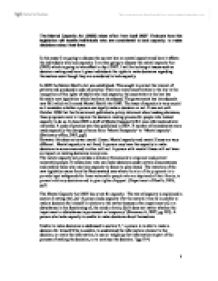 The Mental Capacity Act (2005) takes effect from April 2007. Evaluate how this legislation will enable individuals who are considered to lack capacity, to make decisions about their lives.

The Mental Capacity Act (2005) takes effect from April 2007. Evaluate how this legislation will enable individuals who are considered to lack capacity, to make decisions about their lives. In this essay I am going to discuss the current law on mental capacity and how it affects the individuals who lack capacity. I am then going to discuss the mental capacity Act (2005) which is going to take effect in April 2007. I will be looking at issues such as decision making and how it gives individuals the rights to make decisions regarding themselves even though they are considered to lack capacity. In 1983 the Mental Health Act was established. This sought to protect the interest of patients and produced a code of practice. There are many uncertainties in the law in the recognition of the rights of adults who lack capacity, the uncertainty in the law has formed a new legislation which has been introduced. The government has introduced a new Bill which will amend Mental Health Act 1983. The issue of capacity is very crucial as it considers whether a person can legally make a decision or not. It was not until October 1999 that the Government published a policy statement about making decisions, these proposals were to improve the decision making process for people who lacked capacity to do so. ...read more.

This objective is a test of the possible of what would be in the person's best interest and apply it.). Decision makers must also take in to account the possibility of the likelihood of the person regaining capacity. If it is possible that decisions can be left until person regains capacity then it should. However in practice the issue of 'best interest' and decision making is really difficult as the decision maker should not let what they believe will be for the best interest instead of what really that person may have wanted. The Lasting Power of Attorney (LAP) section 9-14, replaces the 1989 enduring power of attorney to make decisions on property and financial affairs, it has now been extended to health and welfare decisions. An individual who has capacity can nominate a person to make decisions on their behalf if they lose the capacity to make decisions about themselves. The decision making can include health, welfare, property and money. 'The individual creating the LPA can also set a variety of conditions on the exercise of the powers. Anyone acting under the powers of an LPA is constrained by the basic principles of the Act and has to make decisions in the best interests of the incapacitated person.' ...read more.

The person with capacity is given the opportunity to make decisions about themselves and pass this decision making power over once they lack capacity. They are also given the right to make any living will. What ever is written in the will is bound by for example refusing treatment. The law recognises the will as legal document and respects the decision makers' decision. Even though the law has tried to include the person who lacks capacity to make decisions about their lives there are still questions about substitute decision making is this really what the person would have wanted. The strength of this act is that living wills are binding to an extent and allows the person's wishes to be carried out. The court also tries to make the best possible decisions by appointing a deputy however decisions made and whose interest is still debatable. http://www.bma.org.uk/ap.nsf/Content/mencapact05?OpenDocument&Highlight=2,mental,capacity http://www.uea.ac.uk/~wp276/MENTAL%20HEALTH%20ACT%20REFORM.htm (Jones.R.M, Mental capacity Act manual, sweet & Maxwell, 2005 British Medical Association, (2007), Withholding and withdrawing life prolonging medical treatment: guidance for decision making, (third edition) Britain, Blackwell Publishing The stationary office, (2005) Explanatory Notes: Mental Capacity Act 2005, London, TSO publisher Department of Health, Bournewood Briefing Sheet - June2006 ?? ?? ?? ?? 1 ...read more.