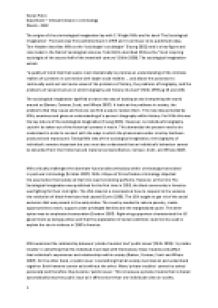 The origins of the criminological imagination lay with C. Wright Mills and his book The Sociological Imagination.

﻿Kieran Petre David Scott ? Critical thinkers in criminology Words - 2282 The origins of the criminological imagination lay with C. Wright Mills and his book ?The Sociological Imagination?. The book was first published back in 1959 and it continues to be published today. Tom Hayden describes Mills as the ?sociologist?s sociologist? (Young 2001) and is a key figure and role model in the field of sociological sciences. Todd Gitlin described Mills as the ?most inspiring sociologist of the second half of the twentieth century? (Gitlin 2000). The sociological imagination entails ?a quality of mind that that seems most dramatically to promise an understanding of the intimate realties of ourselves in connection with larger social realities ? and allows the possessor to continually work out and revise views of the problems of history, the problems of biography, and the problems of social structure in which biography and history intersect? (Mills 1959 pg 15 and 225). The sociological imagination signified a brand new way of looking at and interpreting the world around us (Barton, Corteen, Scott, and Whyte 2007). It looks at the problems in society, the problems that they cause and how we can find a way to resolve them. This new idea provided by Mills, examines and gives an understanding of a person?s biography within history. ...read more.

The criminological imagination addresses how we gain our criminal knowledge and how the criminal justice system uses this knowledge in criminal justice policies. It insists on an awareness of social harms and injustices and the relationship to the permeation of crimes. Barton (2007) argues that rather than focusing upon an individual who is involved in crime, the criminological imagination tries to understand the social and economic contexts that produce not only crime but responses to crime. This analysis of crime, examines the individual and their interactions, meanings and motivations of other criminals though these means. However, alongside this theory, there has been the problem of the political and ideological construction of crime and the processes which have led to the naturalizations of these dominant conceptions (Barton, Corteen, Scott, and Whyte 2007). The criminological imagination highlights the problem of marginalization and criminalisation. The Blair government played a big part in how we marginalized other people in our community. Blair had the slogan ?tough on crime, tough on the causes of crime? (Barton, Corteen, Scott, and Whyte 2007). This launched an attack on some of the most vulnerable people in our society. The Blair government introduced a total of 1018 new crimes in an 8 year period between 1997 and 2005 (Barton, Corteen, Scott and Whyte 2007). ...read more.