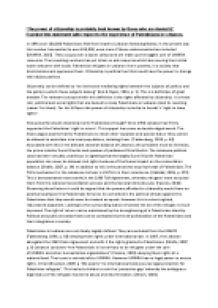 The power of citizenship is probably best known by those who are denied it. Examine this statement with respect to the experience of Palestinians in Lebanon.

Transfer-Encoding: chunked ﻿?The power of citizenship is probably best known by those who are denied it.? Examine this statement with respect to the experience of Palestinians in Lebanon. In 1948 over 100,000 Palestinians fled from Israel to Lebanon following Nakba. In the present day this number has swelled to over 450,000, even more if those undocumented are included (UNWRA, 2015). They occupy over a dozen camps and are make up the biggest user of UNWRA resources. Their swelling numbers has put strain on aid resources whilst also souring their initial warm welcome with locals. Palestinian refugees in Lebanon live in poverty, in a society that discriminates and oppresses them. Citizenship is political tool that could have the power to change their abject position. Citizenship can be defined as ?an institution mediating rights between the subjects of politics and the polity to which these subjects belong? (Isin & Nyers, 2014, p. 1). This is a definition of great breadth. The relevant concept within this definition is the rights afforded by citizenship. It is these civil, political and social rights that are denied to many Palestinians in Lebanon (and its resulting ?power? for them). For Isin & Nyers the power of citizenship is similar to Arendt?s ?right to have rights?. ...read more.

(UNWRA, 2011) UNWRA is also the main provider of care as all Palestinians are denied access to Lebanese public health care as well as any forms of social security. (Shafie, 2007, pp. 12-13) In addition to this are property rights. Presidential Decree 11614 of January 1969, modified in April 2001 by Law No. 296, prohibits persons ?who not carry a citizenship issued by a recognised state? from owning property in Lebanon. This has severely limited any chance of social mobility for Palestinians and has essentially left them confined to crowded camps whose limits have not been expanded since 1948 but with at least 300,000 more inhabitants. Worsening this issue is de facto outlawing of construction materials in the camps which has left them in a state of severe disrepair. (Shafie, 2007, p. 13). This confinement is exacerbated by the limits on movement. Movement to and between refugee camps, are subject to strict security measures. The Lebanese army maintains checkpoints at the entrances to many of the camps. To top this off international travel documents and visas are difficult to procure. (Universal Periodic Review, 2015, p. 100) If Palestinians were afforded the rights of citizenship or that of a permanent resident they could enjoy the right of private ownership, free movement and avoid their increasing ghettoization. ...read more.

This would remove them from the damaging legal ambiguity, alleviate Lebanese fears of tawteen and allow Palestinians the opportunity as UNWRA coined it to ?get on with their lives?. Secondly there should be the fostering of Palestinian civil society and identity this would not only focus Palestinian political efforts but also ensure the enduring of the right of return. These recommendations would serve to ease pressure on both sides of the dilemma, with the power of the aforesaid citizenship serving to improve the lives of the hundreds of thousands of Palestinians in Lebanon. In conclusion it has been shown that the legal ambiguity of the Palestinians has led to a clear protection gap. This gap led to difficulties for the Palestinians due to the concept of reciprocity in Lebanese law, the enshrinement of the right of return in Arab consciousness and the fear of tawteen among the Lebanese political class and public. Some could argue that these problems are intransigent. The Palestinians are stuck in the impossible position of a hostile host nation with the aid of a powerless ?caretaker?. What could be the salve to these difficulties? It has been clearly demonstrated that the guarantor of rights in Lebanon is citizenship; Palestinians are feeling the power of its absence. Therefore the granting of citizenship in accordance with the recommendations above would have the power to lift the Palestinians to a level playing field as their rights are guaranteed by law. ...read more.