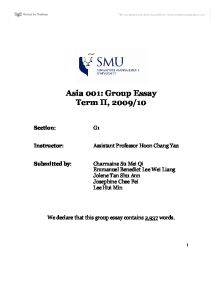 The Public Sphere in Singapore

Asia 001: Group Essay Term II, 2009/10 Section: G1 Instructor: Assistant Professor Hoon Chang Yau Submitted by: Charmaine Su Mei Qi Emmanuel Benedict Lee Wei Liang Jolene Tan Shu Ann Josephine Chee Fei Lee Hui Min We declare that this group essay contains 2,937 words. I. Abstract This paper seeks to examine the Habermasian notion of the public sphere in the Asian context. With specific reference to Singapore, we will mark the development of civil society, taking into account both local and global factors. At its conclusion, we hope to answer the question of whether a vibrant public sphere is integral to the continued development of Singapore in the future. II. Habermas' Notion of the Public Sphere The modern-day conceptualisation of the public sphere can be traced back to ideas expressed by Jurgen Habermas who conceived it primarily as an arena for private individuals to come together as a public to engage in rational and critical debate (Habermas, 1962). Not only was the public sphere perceived to be distinct from state authority, it also functioned as a 'site for the production and circulation of discourses that were critical of the state' (Fraser, 1990: 57). By acting as a check on state power and authority, the notion of the public sphere is essential to the proper functioning of participatory democracy (Calhoun, 1992). This can be seen in contemporary Western societies, where political action and discourse is largely shaped and influenced by public opinion (Behnhabib, 1992: 87). Thus, the notion of a vibrant public sphere has been traditionally conceived as a means to constantly question the effectiveness and necessity of governmental action. III. Overview: The Public Sphere in Asia Unlike the Western conception, the public sphere in Asia functions less as a check on government but more as a tool to aid development. In Asia, any attempt to divorce the public sphere from the political context is impossible (Birch, Schirato & Srivastava, 2001: 89). ...read more.

V. The Success of our Approach Thus Far The idea of a "vibrant" public sphere is anathema to Singapore's developmental strategy due to the prioritisation of economic development and social order over other goals (Hor, 2001). Thus, it is not surprising that the Singapore government exercises significant control over the public sphere. Interestingly, Singapore has taken a further step in adopting the public sphere as a tool for nation building. More disturbingly, the public sphere has also been used to suppress political opposition by not only denying them the ability to spread their ideas, but also by actively portraying them in a negative manner (Seow, 1998). This is contrary to the Harbermasian notion of the public sphere. Indeed, the process of becoming "Singaporeanized" is characterized as a state of becoming "politically inert and economically dynamic (M.C. Davis, 1999). As a result of this policy of depoliticisation, the public sphere has been brought into alignment with goals such as "nation building" (Birch, Schirato & Srivastava, 2001: 90). This is further propagated by the nation's leaders in their highly paternalistic approach to government. In other words, the collective mindset of society has also contributed to the formation of a "domesticated" public sphere. As can be seen, the notion of the public sphere in Singapore is mostly top-down and bears little resemblance to Habermas' ideal. What was originally envisioned as a check on state power and authority has instead become a tool for government control. While one might be tempted to castigate Singapore's vestige of a public sphere as a mere product of an authoritarian regime operating behind the guise of democracy, it is undeniable that this approach has served Singapore well thus far. During Singapore's early years, there was grave social unrest as a result of the communist threat, racial riots, and frequent demonstrations and worker strikes (S Jayakumar, 2000). The unfettered freedom to publicly air one's views, no matter how controversial, would likely lead to greater unrest and upheaval. ...read more.

Such unprecedented progress was in no small part attributed to sound and efficient government policies, which not only provided for Singapore's rapid economic development, but also set the necessary groundwork for growth in maintaining social and political stability (S Jayakumar, 2000). The success of Singapore's development hinged on the integration of economic, political and social goals and it is plainly evident that the government has exercised a significant amount of control in all three areas, arguably with mostly positive results (Srivastava, 1998). However, such an approach may no longer be tenable in Singapore today. Bringing up Maslow's theory once again, now that Singaporeans have their basic needs satisfied; there have been calls for more liberalisation of the public sphere (Thio, 2002). As can be seen, due to recent global developments and the increased sophistication of Singaporeans, Singapore has been moving towards a more vibrant public sphere. A vibrant public sphere is important for continued economic, political and social development. Firstly, a vibrant public sphere checks governmental power by allowing private individuals a platform for criticism of governmental action. There is no guarantee that Singapore's leaders would remain "junzi" forever thus thoughtless deference to the government is not sustainable in the long run (Thio, 2002). Secondly, a vibrant public sphere also encourages discourse and allows the freedom for individuals to air their views. According to Maslow, this freedom is important for helping individuals achieve self-actualisation and in so doing, allow for the attainment of a more mature society (Maslow, 1943). Thirdly, this would in turn promote creativity and innovation among Singaporeans, both of which are important traits in today's economy (S Jayakumar, 2000). VIII. Conclusion Thus, in conclusion, while a "vibrant" public sphere has not been integral to our success to date, it is submitted that it is nonetheless important for our continued success in the future. In any case, despite governmental reluctance, it is in our view that forces, both international and local, would compel it in the right direction towards a more liberal and "vibrant" public sphere. ...read more.