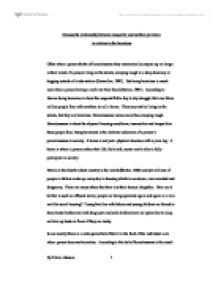 The relationship between welfare provision and homelessness

Discuss the relationship between inequality and welfare provision in relation to the homeless Often when a person thinks of homelessness they automatically conjure up an image in their mind of a person living on the streets, sleeping rough in a shop doorway or begging outside of a tube station (Donnellan, 1991). But being homeless is much more than a person having a roof over their head (Herron, 1997). According to Herron being homeless is about the unquantifiable day to day struggle that over three million people face with nowhere to call a home. They may not be living on the streets, but they are homeless. Homelessness means more than sleeping rough. Homelessness is about the abysmal housing conditions, insecurities and inequalities these people face. Being homeless is the ultimate indication of a person's powerlessness in society. A home is not just a physical structure with a price tag. A home is where a person makes their life, feels safe, secure and is able to fully participate in society. Britain is the fourth richest country in the world (Shelter, 2006) and yet millions of people in Britain wake up every day in housing which is run down, over crowded and dangerous. There are many others that have lost their homes altogether. How can it be that in such an affluent nation, people are being uprooted again and again in a vain wait for social housing? Young families with babies and young children are forced to share hostel bathrooms with drug users and sick children have no option but to sleep on blow up beds on floors if they are lucky. In our society there is a wide spread belief that it is the fault of the individual as to why a person becomes homeless. According to this belief homelessness is the result of an individuals own incompetence, bad luck and irresponsibility's. However, sudden financial crises, relationship breakdowns and abuse are the most popular explanations of why a person can lose their home. ...read more.

In a survey of private landlords in Britain in 1995, Crook et al found that most landlords judged prospective tenants by their economic status. In explaining their reasons for this, some landlords stated the fact that they considered housing benefit claimants to be 'undesirable' in some way as there still is a lot of stigma attached to people who claim benefits and housing benefits in particular. However for the majority of landlord's their decision of not to take people on housing benefits rested with difficulties within the benefits system itself. The length of time taken to process the application and delayed payments were the most likely reasons many landlords gave. Local Authorities are statutorily bound to process a claim within two weeks or receiving the claim, however they do state that delays do occur. As in all aspects of everyday life delays do occur, but the question needs to be raised that in such a system as the welfare state are such delays in housing acceptable when these delays are preventing a person from accessing a home or even losing their home.. There are also cases where residents have been evicted from their homes because of delays in housing benefits (BBC1, 2006). Delays within the benefits system can be prevented. More commitment is needed within local authorities to ensure that any housing benefit applications are processed as quickly and efficiently as possible. However, it could be argued that landlords are just using the benefits system as an excuse not to let their properties to people on housing benefits but in fact it is the social stigma attached to the benefits that is preventing them from letting their properties to the homeless. The government is currently reviewing proposals for reform of the Housing Benefit system, which they outlined in January 2006: A New Deal For Welfare. Reforms constitute a national roll out of the Local Housing Allowance pilot Scheme in the private rented sector (Welfare Reform Green paper, 2006). ...read more.

Because of their transient, chaotic lifestyles many homeless people miss appointments for health services or have moved on before they receive an appointment as waiting lists within the NHS can be very long. There is also the issue that health is not a priority for many homeless people, because they are faced with so many other problems, they often forget or do not have the means to take care of themselves, therefore they only visit a GP or want to access health services once they are ill or have a health issue. Many try to use accident and emergency units for something that should be dealt with by a GP. Because accident and emergency units are over stretched they tend to tell a homeless person that they can not treat them and they should make an appointment with their own GP, but if a homeless person does not have a GP no treatment will be accessed by the homeless person. It can be concluded that there are many inequalities and barriers that homeless people are faced with, when accessing welfare provisions. Increasing housing inequality is not inevitable. The government can and must choose to do something about it. The government can and should be doing more to help these vulnerable members within our society. Increased investment in good quality social housing is needed so more people can benefit from the security and affordability of social housing. There also needs to be more opportunities for people at risk of homelessness and for those who do become homeless, more support, help and guidance is needed to help these families and individuals find settled homes, not just a roof. Tighter restrictions should be placed on private landlords' to ensure that the housing that they provide is both safe and secure for the individuals and families that rent their properties. Local authorities play a key part in determing a persons' housing status, more commitment is needed to ensure that these welfare systems are run more efficiently. Homelessness has no place in a sustainable community and it can and should be eradicated. ...read more.