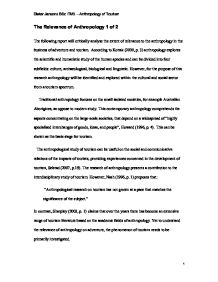 The Relevance of Antropology

The Relevance of Anthropology 1 of 2 The following report will critically analyse the extent of relevance to the anthropology in the business of adventure and tourism. According to Kottak (2000, p. 3) anthropology explores the scientific and humanistic study of the human species and can be divided into four subfields: culture, archaeological, biological and linguistic. However, for the purpose of this research anthropology will be identified and explored within the cultural and social sector from a tourism spectrum. Traditional anthropology focuses on the small isolated societies, for example Australian Aborigines, as oppose to modern study. This contemporary anthropology comprehends the aspects concentrating on the large-scale societies, that depend on a widespread of "highly specialised interchanges of goods, ideas, and people", Howard (1996, p. 4). This can be shown as the basis stage for tourism. The anthropological study of tourism can be useful on the social and communicative relations of the impacts of tourists, providing experiences concerned in the development of tourism, Selstad (2007, p.19). The research of anthropology presents a contribution to the interdisciplinary study of tourism. However, Nash (1996, p. 1) proposes that: "Anthropological research on tourism has not grown at a pace that matches the significance of the subject." In contrast, Sharpley (2003, p. 1) claims that over the years there has become an extensive range of tourism literature based on the academic fields of anthropology. Yet to understand the relevance of anthropology on adventure, the phenomenon of tourism needs to be primarily investigated. The foundation of tourism as people and society consist of a holistic view of human associations and the practice of cross-culture analysis (Smith & Brent 2001: Sharpley 2003). ...read more.

47). This can be used as a competitive tool for the 'host' and 'guest' in the tourism industry as the knowledge can predetermine the system and value of the representation. The can ultimately ensure the tourist does not go anywhere real, hence the tourist bubble, Burns (1999). This suggests that with the broader understandings of what may be considered real, authentic or staged with promotion of technology information, it provides tourists to seek for more adventure. O'Reilly (2006, p. 998) declares over the past few decades, independent travel has grown in popularity. Associating adventure tourism with young people who want to experience "freedom, personal development and fulfilment", it has become part of education. Whereas, Cater (2006, p. 317) suggests that with adventure tourism is a rapidly expanding market segment it has contributed $220 billion annually to the US economy alone. To support, Eurostar (2011) high-speed passenger service, launched a new campaign "exploring is beautiful" to inspire travellers to explore Europe through connecting trains to city centre destinations. This shows that transportation links are becoming easier for tourists to explore, yet as a consequence this could suggest that adventure tourism is evolving into mass tourism. The term 'adventure' can be associated with many people and images that connect with the imagination and emotions of the adventure experience, Swarbrooke et al (2003, p. 7). According to Buckley (2003, p. 8) the pressures of the market demand have commercialised adventure activities that have now evolved from hard to soft adventure in some destinations. For example, Brazil relies on the natural resources such as rivers, waterfalls, beaches, national parks/forests as a comparative advantage to strengthen their economy, ranked 58/ 139 in travel and tourism competitiveness report (see appendix: Figure 2 ). ...read more.

In addition Mathieson & Wall (1994, p. 103) claim that tourism aids in neo-colonialism in certain economic conditions: "...developing countries grow to depend on tourism as a means of securing revenue, a large proportion of expenditures and profits flow back to foreign investors and high leakages occur, non- locals are employed in professional and managerial positions." This can imply that future trends of tourism impact on how the destination interpreted, however this can often led to superiority of one culture overtaking another which determine political motives that relate to the early explores and the classification of tourism. Overall, an important task in anthropology research is to explore the range of tourist experiences. The emphasis of the impact of mass tourism on host populations can be argued due to the interest of anthropologists in local studies. Therefore the views and experiences of tourists have major relevance for the anthropology of tourism. As development in technology have aided in the independence of tourists this can suggest that adventure has become a trend, although consequently destinations have become less authentic due the popularity. Paying attention to how tourists interact with their social surroundings can help anthropologists expand and refine the knowledge of what tourists see and do. The adventure role which involves the tourist in interaction with a wide variety of people can determine on the type of hard or soft adventurer, however the individual tourist must ultimately be considered. In a whole range of contexts, tourists are portrayed as second-class citizens McCabe (2005), the ambiguity of adventure and tourism overall portrays a complex entanglement which firmly poses the tourist experience as a topic for anthropological research. ...read more.