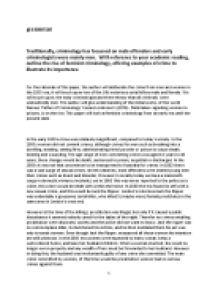 ﻿@14060560 Traditionally, criminology has focussed on male offenders and early criminologists were mainly men. With reference to your academic reading, outline the rise of feminist criminology, offering examples of crime to illustrate its importance. For the rationale of this paper, the author will deliberate the crime from men and women in the 1800 era, it will touch upon two of the UKs notorious serial killers male and female. We will touch upon, the early criminologist and there theory that all criminals were undoubtedly men. The author will give understanding of the initial works, of the world famous ?Father of Criminology? Cesare Lombroso?s (1876). Data taken regarding women in prisons, is on the rise. This paper will look at feminist criminology from an early era until the present date. In the early 1800s crime was relatively insignificant, compared to today?s society. In the 1800s women did not commit crimes, although crimes for men such as breaking into a dwelling, stealing, setting fires, administrating vitriol powder or poison to cause death, beating and wounding. The age range of men committing crimes was aged 14 years to 48 years, there charges would be death, sentenced to prison, acquittal or discharged. In the 1800s it was not that uncommon to be transported to Australia for crimes. In 1862 there was a vast surge of s****l crimes, street robberies, most offenders were indeed young men their crimes such as drunk and disorder. ...read more.

Even more so before this surge in criminology, little consideration had ever been given to women and their crimes including from the Criminal Justice System. All who studied women and crime, stated that women were not born for a life of crime. The women?s expertise was to stay at home, with the children, all along it has been said that woman are ?nurturers?. In the 1950s crimes of woman are relevantly small, but however still a punishable crime. Crimes in this era, was prostitution, stealing, petty crimes and abortion. Feminist have argued regarding the, philosophies of the criminologist, they state that the world of criminology is a ?gender issue ?and always has been. Feminist?s criminology involves them being critical in all aspects, especially when it concerns women offenders other criminologists are ignorant. Women do not represent the large population of offenders in the UK. In 2013 in the UK the prison population was 84,832 of that 80,880was men, and 3,952 were women (gov.uk.stastics). There are officially 71 prisons in the UK, there are 12 women?s prisons (justice.gov.uk). In 2014 there is a slight rise in prison population for women, the prison population was 85,406 the male population was 81,528, and the female population was 3,878(gov.uk.stastics). However data collected from the prison reform trust may explain, why women commit crime. ...read more.