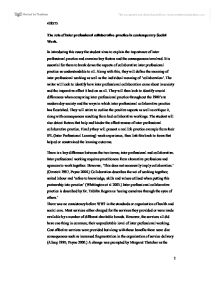 The Role of Interprofessional Practise

This is essential as it 'requires the listener to focus on the speaker' (Payne 2000.) Also by showing each individual that you are interested in what they are saying encourages further issues to be brought forward, for instance if a point was made and ignored the first time, the person is less likely to make another point and this may constitute as fatal. All issues raised should be treated as important. There are also other benefits such as the knowledge of professional roles. This means that stereotypes of other positions are eliminated and practitioners feel more at ease approaching them each time. Confidence has been identified by the author as being very important in more ways than one, for example the having to interact with someone you do not know means you have to possess the skill of being confident originally, and also each time you meet you would gain more experience as an individual. Also, confidence is thought to 'develop through one's career from interaction and feedback, from mentors and others' (Hudson 2002.) Trust and mutual respect is the most obvious point to be made but must not be forgotten. Trust is an 'essential attribute to collaboration' (Stapleton 1998) ...read more.