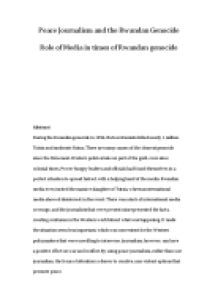 The Role of Media. Peace Journalism and the Rwandan Genocide

ï»¿Peace Journalism and the Rwandan Genocide Role of Media in times of Rwandan genocide Abstract During the Rwandan genocide in 1994, Hutu extremists killed nearly 1 million Tutsis and moderate Hutus. There are many causes of the clearest genocide since the Holocaust. Western policies take on part of the guilt, even since colonial times. Power hungry leaders and officials had found themselves in a perfect situation to spread hatred, with a helping hand of the media. Rwandan media even incited the massive slaughter of Tutsis, whereas international media showed disinterest in the event. There was a lack of international media coverage, and the journalists that were present misrepresented the facts, creating confusion in the Western world about what was happening. It made the situation seem less important, which was convenient for the Western policymakers that were unwilling to intervene. Journalism, however, can have a positive effect on war and conflict. By using peace journalism, rather than war journalism, the focus of attention is drawn to creative, non-violent options that promote peace. Introduction "The media, like so many others in Rwanda, failed. The world powers failed. Individually we failed." — Roméo Dallaire, head of UN mission to Rwanda The 1994 Rwandan genocide is one of the most cruel and outrageous events in recent human history. During this period, the darkest in the small African country, media did not do anything in order to stop the genocide. In fact, the major Rwandan media even encouraged the mass killings. Hindsight, the media and the international community are said to have failed by solely standing and watching it happen. ...read more.

According to Kellow and Steeves, the broadcaster ?Radio-Television Libre des Mille Collines? (RTLM), of which the Hutu president had a significant shareholder, started spreading hate media in 1993. They say that the media was set up to prepare the civilians for the genocide that had yet to come.[13] The radio was a convenient medium for the Hutu government, as it was affordable for the average Rwandans. It was different from Radio Rwanda, the radio station that had been the government?s mouthpiece until then. It was a typical FM radio; playing music that the Rwandan citizens liked, and using deejays that made them laugh. They could call the radio deejays, make comments, and request songs. This is the reason why the Rwandans, also when the hate media started, perceived RTLM as their own voice. However, it still was a governmental organization and had kept its authoritarian tone. The hate media toward Tutsis could therefore not easily be disregarded as a neighbor?s proposal.[14] When the genocide started, RTLM was a propagandist medium, which evoked the Hutus to exterminate the Tutsis and moderate Hutus. The Tutsis were called cockroaches that were ruining the Rwandan society, and RTLM indicated several methods to kill Tutsis. Also, it live reported conversations between supposedly Tutsis, talking about how much they hate Hutus.[15] Later during the genocide, names of Tutsis that had yet to be killed were mentioned on RTLM, together with the location where they could be found.[16] Radio Rwanda followed RTLM?s example, calling the killing of Hutu ?work?, and that all Hutus owed it to society to ?work hard?. ...read more.