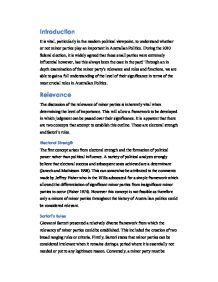 The significance of minor parties in Australian Politics.

Introduction It is vital, particularly in the modern political viewpoint, to understand whether or not minor parties play an important in Australian Politics. During the 2010 federal election, it is widely agreed that these small parties were extremely influential however, has this always been the case in the past? Through an in depth examination of the minor party's relevance and roles and functions, we are able to gain a full understanding of the level of their significance in terms of the most crucial roles in Australian Politics. Relevance The discussion of the relevance of minor parties is inherently vital when determining the level of importance. This will allow a framework to be developed in which judgment can be passed over their significance. It is apparent that there are two concepts that attempt to establish this outline. These are electoral strength and Satori's rules. Electoral Strength The first concept arises from electoral strength and the formation of political power rather than political influence. A variety of political analysts strongly believe that electoral success and subsequent seats achieved are a determinant (Janech and Mathieson 1998). This can somewhat be attributed to the comments made by Jeffrey Fisher who in the 1970s advocated for a simple framework which allowed the differentiation of significant minor parties from insignificant minor parties to occur (Fisher 1974). However this concept is not feasible as therefore only a minute of minor parties throughout the history of Australian politics could be considered relevant. ...read more.

Halfway House The Democratic Labor Party (DLP) was a prime example of the halfway house, which was a party that mainly consisted of Catholic individuals who had a falling out with the Australian Labor Party (ALP) (Janech and Mathieson 1998). During its early years, the party was a firm follower of the Labor Movement however this dramatically changed after the effect of two components of the halfway house were realized. The first was the shift of votes from former Labor supporters, through preferences, to the Liberal and National Parties. In fact 90% of the minor party's voters were willing to allocate their vote to the coalition (Janech and Mathieson 1998). This is primarily due to the fact that the prime reason for the development of the DLP was to oppose Labor's 'so called' communist policies and essentially inhibit the Labor party from entering office (Janech and Mathieson 1998). The second component is that the DLP experienced a large shift of Catholic voters from the Labor party to the coalition. The halfway house can also be applied to minor parties as a political channel for marginal group. Individuals that are major party supporters, but perceive as though their particular interests and issues are not being addressed by the major parties may endeavor to form a minor party to continue to express these points (Janech and Mathieson 1998). V.O. Key states that minor parties are often a step in the process of reshuffling and in fact major parties can gain by losing its 'discordant elements to the other' (Key 1967: 280). ...read more.

Firstly, as the democrats were firmly ingrained in the high importance category for the major parties due to the balance of power they achieved during the 1990s within the Senate, greater policy debate occurred. Secondly, the patterns of electoral support differed greatly between the upper and lower house. The levels of support for the Democrats were considerably higher in the Upper House, which creates certain issues (Janech and Mathieson 1998). As the Democrats usually didn't gain a large support in the lower house they, often established a balance of power in the upper house, which meant that many of the political debates occurred behind doors that reduced the transparency of the system. The Electorate Minor parties may be considered as a positive component political system as it allows a larger range of the electorate to express their views. According to S.L. Fisher, the existence of the minor parties is simply to allow individuals to express their social and economic dissent and essentially serve as a political outlet for social groups whose grievances have been ignored by the major parties (Fisher 1974). It can also be seen that minor parties are safety valves as those impassionate or marginalized individuals from the major parties are able to sublimate their mortification through party activity (Janech and Mathieson 1998). Australia's unique preferential voting system allows the minor parties to have a significant influence, through preferences, over who wins the seats (Janech and Mathieson 1998). The unique arithmetic used to decide the results of elections allows minor parties to affect the outcomes of the elections. In the 2010 election, the minor parties experienced a total swing of 4. ...read more.