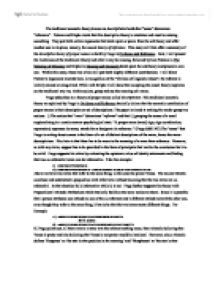 The traditional semantic theory known as descriptivism holds that "sense" determines "reference". Putnam and Kripke insist that this descriptive theory is mistaken and must be missing something. They put forth certain arguments that break apart or prove false the old theory and offer another one in its place, namely, the causal theory of reference. This essay will first offer a summary of the descriptive theory of proper names as held by Frege in On Sense and Reference. Next, I will present the limitations of the traditional theory and what it may be missing, followed by how Putnam in The Meaning of Meaning and Kripke in Naming and Necessity break apart the old theory and present a new one. Within this essay, these two critics will put forth slightly different contributions. I will direct Putnam's arguments towards how; in recognition of the "division of linguistic labour", the referent is initially named or categorized. While with Kripke I will show that accepting the casual theory improves on the traditional way we, within society, grasp and use the meaning of a name. Frege subscribes to a theory of proper names called descriptivism. This traditional semantic theory as explained by Frege in On Sense and Reference basically claims that the semantic contribution of proper names is their description or set of descriptions. The paper is aimed at making the reader grasp two notions. ...read more.

Aluminium is plentiful here on earth so most pots and pans are made to it. However on twin earth they refer to the naturally occurring substance with the atomic number 48 as 'Molybdenum' and the substance with the atomic number of 48 as 'Aluminium'. On twin earth the substance they refer to as 'Aluminium' (which we refer to as 'Molybdenum') is plentiful so their pots and pans are made of it. So the question is "are earthlings and twin earthlings referring to the same name?" Since they are in the same psychological state, therefore grasping the same concept and using the same term, Frege would say yes! However, of course the answer is "NO." " Also we have to say that Oscar 1 and Oscar 2 mean different things by 'aluminium' .......again we see that psychological state of the speaker does not determine the extension" (Putnam Mof M 226) Here one can see the contribution of the real physical world (externalism). Putnam writes that the concepts of natural occurring things like people, animals or substances are concepts that can be deconstructed into concepts of the qualities by which we classify something as an Aristotle, water or Aluminium. For Putnam a kind term K is defined by a set of properties that are not descriptions derived from "narrow psychological states" as Frege said, but something more dependant on physical composition (genetic, chemical or elemental). ...read more.

This is what is meant by a rigid indicator , that it picks out the same thing in all possible worlds. Since we already know that the initial meaning comes from composition (in the case of Aristotle, genetics) this name will pick out the same individual in all worlds regardless of the descriptions about what he has done. Once it is named, it is a rigid designator of that referent. Kripke has sufficiently debunked descriptivism and sufficiently shown that it is not the sense that determines who the referent of 'Aristotle' is, and has then put in place the casual theory. Together Putnam and Kripke have shown that the traditional semantic theory is mistaken. The division of linguistic labour exemplifies that "meanings are not in the head" or "derived from a narrow psychological state" The division of linguistic labour shows that a proper name is one that is derived from the objects physical, chemical or elemental composition which can be detected by an expert which causes relational thoughts by which we conceive of like terms. The casual theory dictated that the meaning of a proper name is simple the individual or object to which it refers. The names referent is originally fixed by a baptismal act, at which point it becomes a rigid designator of the referent. Subsequent uses of that name are linked by a causal chain. The causal theory of Reference offers significant improvement on the traditional theory and offers a more probable explanation. ...read more.