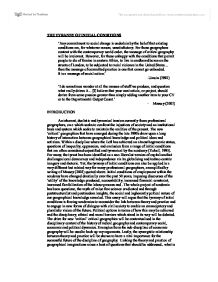 The Tyranny of Initial Conditions.

THE TYRANNY OF INITIAL CONDITIONS 'Any commitment to social change is underlain by the belief that existing conditions are, for whatever reason, unsatisfactory. For those geographers content with the contemporary world order, the message of critical geography will be irrelevant. However, for those unhappy with the conditions that permit people to die of famine in eastern Africa, to live in cardboard boxes on the streets of London, to be subjected to racial violence in the United States... then the message of committed practice is one that cannot go unheeded. It is a message of social action.' -Unwin (1992) 'I do sometimes wonder at all the masses of stuff we produce, and question what really drives it... [I] believe that your next article, or project, should derive from some passion greater than simply adding another item to your CV or to the Departmental Output Count.' - Massey (2001) INTRODUCTION An inherent, dualistic and tyrannical tension currently faces professional geographers, on e which seeks to confront the injustices of society and an institutional basis and system which seeks to maintain the realities of the present. The new 'critical' geographies that have emerged during the late 1990s draw upon a long history of interaction between geographical knowledge and political ideas and activism. Within a discipline where the Left has achieved an almost hegemonic status, questions of inequality, oppression, and exclusion form a range of initial conditions that are often considered unjustified and tyrannical by the academy (Tickell, 1995). For many, the tyrant has been identified as a neo-liberalist version of capitalism that challenges local democracy and independence via its globalising and techno-centric imagery and rhetoric. Yet, the tyranny of initial conditions can also be applied in a very different but related way for many professional geographers, exemplified by writing of Massey (2001) quoted above. Initial conditions of employment within the academy have changed drastically over the past 50 years, imposing discourses of the 'utility' of the knowledge produced, accountability, increased financial constraint, increased flexibilization of the labour process and . ...read more.

What unites these heterogenous theoretical productions is precisely theor CRITICAL stance VIS A VIS comtemporary cultural, eoncomic and political relations and their resulting commitment to changing relations for the better' Johnston (2000) et al. 'A diverse and rapidly changing set if ideas and practices within human geography linked by a shared commitment to emancipatory politics within and beyond the discipline, to the promotion of progressive social change and to the development of a broad range of critical theories and their application in geographical research and political practice.' Within recent academic journals there has been a growing concern over the gulf between theory and practice, with debates raging over 'activism and the academy' and the question of 'policy relevance'. Entries in dictionaries. A widespread concern with the politics of geographical knowledge has developed new 'critical' morphologies in the last few years (Prog in Human Review). This is strongly apparent in the Dictionary of Human Geography in new entries such as 'activism and the academy' and 'critical geography' - concerns with placing geographical knowledge within broader social and political contexts, and making geography relevant to issues of ethics, justice and social transformation. Recent writing seeks to rekindle and reorient 'radical' geographical agendas... continue to be marked with ambitious and important attempts to 'change both the discipline of geography and the world ' (Blunt & Wills, 2000). A major concern with mapping 'critical geographies' - the change in terminology marking an important shift in emphasis and style - eg Antipode editorial board championing 'dissident geographies' and a new relationship between academic practice and political practice' (Peck, & Wills, 2000) that encourages new kinds of knowledge making and political activity, such as direct action. But influence beyond academy of radical and Marxist limited eg Harvey (2000) spaces of hope - Castree (2000) forces critical geographies to think more deeply about the production and consumption f their work. New political climate challenges geographers to foster broader engagements with public policy and to renegotiate the ways in which they practice political relevance in their work and lives. ...read more.

WHY IS THIS ALSO IMPORTANT FOR ACADEMICS Yet the relationship between the contribution of geographers to society in attempts to overturn initial conditions is not a one way process, an altruistic mission to 'make a difference'. By engaging more actively with civil society of policy makers, geographers can improve the quality of their research, reinforce the justification and accountability of geography in the views of the opublic and research grants givers. By getting over an unwillingness to speak for others.. need to make their voices heard. Abicate posts and let them take over? Unite a vernacular and academic understanding of geography Asheim (1990) discipline should develop along lines of its purely academic definition - copnat change and development in conjunction with research problems, philosophies and methds that academic researchers currently regard as interesting and rewarding. Holt Jensen...have to regard the vernacular - public expectations, history and traditions as impt reason for its existence - can be compared to political parties - compete for research funds and commissions tag will attract increasing numbers of students Perhaps it is a selfish quest for self-importance, but maybe not. Poltiical engagement... 'If accomplished effectively and well, and above all, with critical political awareness, it is, surely, a mark of an effective and intellectually worthwhile field of study' (Lee (2002) So what are you going to be? A teacher? I've always thought of geography as a secondary school subject - not really something that you do at university.... Colouring pencils, capes and bays, capital cities Why is geographic academic knowledge threatened -what are the challenges? Problems of current critical geography,,,,,,,,,,, Closley related to the flourishing interest ion critical geographies is the interst in moral philosophy and tethics - eg Smith .. ethics and social justice - socae preclusdes a discussion here yet these ingiths CONCLUSION The tyranny of initial conditions is a relevant motivating factor for all geographers. Everyone has something they think is wrong with the world... verypone want s to make a difference. Part IB Open Book Examination 2003 The Tyranny of Initial Conditions 7 ...read more.