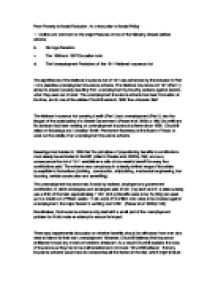 The Unemployment Provisions of the 1911 National Insurance Act

and as a consequence the Act of 1911 established a ratio of one week's benefit for every five contributions paid. The scheme was compulsory in a clearly defined range of industries susceptible to fluctuations (building, construction, shipbuilding, mechanical engineering, iron founding, vehicle construction and sawmilling). The unemployment insurance was funded by workers, employer and government contribution, in which employees and employers paid 21/2d. (1p) each and the state subsidy was a third of the total, approximately 11/2d. (0.6 p) Benefits were to be 7s.(35p) per week up to a maximum of fifteen weeks. 'In all, some 21/4 million men were to be covered against unemployment, the major hazard in working man's life'. ...read more.

or trade depression' (Fraser et al: 2003/p.186). In this view nothing at all would be gained by deviation into moral aspects of individual responsibility. Nevertheless, there was some opposition in the country with some trade unionists still feeling that it was part of the attempt to regiment labour and to break strikes. 'Many workmen felt that the scheme was not a solution to unemployment but just a shifting around the problem'. (Laybourn et al: 1995/p.179) In conclusion the National Insurance Act 1911 gave the British working classes the first contributory system of insurance against illness and unemployment. Churchill defended the scheme as providing a lifebelt for those in temporary trouble, however it did not cope with the long term unemployed and it left out many occupations where there was short term unemployment. ...read more.