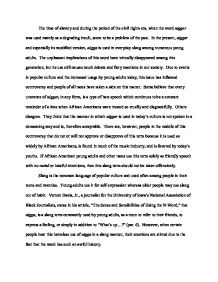 The use of nigger or nigga in present day language.

The time of slavery and during the period of the civil rights era, when the word nigger was used mainly as a degrading insult, seem to be a problem of the past. In the present, nigger and especially its modified version, nigga is used in everyday slang among numerous young adults. The unpleasant implications of this word have virtually disappeared among this generation, but its use still causes much debate and fiery reactions in our society. Due to events in popular culture and the increased usage by young adults today, this issue has inflamed controversy and people of all races have taken a side on this matter. Some believe that every utterance of nigger, in any form, is a type of hate speech which continues to be a constant reminder of a time when African Americans were treated so cruelly and disgracefully. Others disagree. They think that the manner in which nigger is used in today's culture is not spoken in a demeaning way and is, therefore acceptable. There are, however, people in the middle of this controversy that do not or will not approve or disapprove of this term because it is used so widely by African Americans, is found in much of the music industry, and is favored by today's youths. If African American young adults and other races use this term solely as friendly speech with no racial or hateful intentions, then this slang term should not be taken offensively. Slang is the common language of popular culture and used often among people in their teens and twenties. ...read more.

with the idea of it being a racial slur because expressing racism and prejudice is the last thing on their minds when they are saying these slang terms in normal conversations with friends. On the opposite end of the argument are those people who consider nigger in any form to be a racial slur, regardless of the manner in which it is spoken. The people against its use firmly believe that nigger should be struck from the English language and all kinds of slang for reasons stemming from racism. They argue that saying nigger or nigga is equivalent to saying "kike," "chink," or "gook," which are other racial slurs that are not openly spoken, but would certainly cause tensions if they were voiced. However, one could dispute this assertion by stating that "kike", "chink", and "gook" are not used in everyday language and infused into our culture the way nigga continues to be, and for that reason, the two ideas cannot be compared. The main reason why nigger is thought to be intolerable is because it has such a dreadful history and is considered in some circles to be the ultimate symbol of hate. Every utterance of the word is an awful reminder of the tragic days of enslavement when whites purposely called black people "niggers" to degrade them and lower their status. This idea is addressed by Lena Williams, in her book, It's the Little Things, Everyday Interactions That Anger, Annoy, and Divide the Races, when she says, "They know that by calling blacks "nigger" they strip us of our humanity and jar our collective memories, reminding us of days not so long ago when all of us were niggers in their eyes" (198). ...read more.