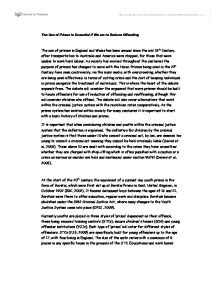 The Use of Prison is Essential if We are to Reduce Offending The use of prisons in England and Wales has been around since the mid 18th Century, after transportation to Australia and America were stopped, for those that were unable to work hard labour. As society has evolved throughout the centuries the purpose of prisons has changed to move with the times. Prisons being used in the 21st Century have seen controversy, via the mass media, with overcrowding, whether they are being used effectively in terms of cutting crime and the cost of keeping individuals in prison alongside the treatment of individuals. This is where the heart of the debate expands from. The debate will consider the argument that more prisons should be built to house offenders for use of reduction of offending and reoffending, although this will consider children who offend. The debate will also cover alternatives that exist within the criminal justice system with the recidivism rates comparatively. As the prison system has existed within society for many centuries it is important to start with a basic history of children and prison. It is important that when considering children and youths within the criminal justice system that the definition is explained. The definition for children by the criminal justice system is that those under 10 who commit a criminal act, by law, are deemed too young to commit a criminal act meaning they cannot be held criminally liable (Davies et al, 2003). ...read more.

The terminology of societal refers to the sentencing structures set by the CJS that do not mean a prison stretch but working with other organizations such as probation and various youth teams. The sentences that exist instead of imprisonment include: referral orders, supervision orders, curfew orders and the new youth rehabilitation order. Referral Order (YJB, 2009) can be given to a young person who pleads guilty to an offence when it is their first time in court. The exception to this rule is when the offence is too serious and is covered under Section 90/91 or under a Detention and Training Order. In some cases if the offence is considered too minor then a fine or absolute discharge is given. The Referral Order means the individual has to attend a youth offender panel made up two volunteers from the local community and a panel advisor (generally someone from the YOT). Along with the offender the victim is also invited to see the contract agreed by all parties being implemented. The contract typically lasts between three and twelve months long with the aim being to repair the harm caused and address the causes of the offending behaviour, this may include the offender attending an anger management course. Once the contract has been completed successfully the conviction is classified as 'spent' and means that depending on the type of job being applied for would not have to always be disclosed, enhancing the youth's future job prospects. ...read more.

It is very difficult for an individual to place themselves back into society once they have a criminal record; this is heightened by the fact being the individual has spent time in prison. With society being unforgiving to those who have committed an offence, which has landed them in prison; it becomes harder to gain meaningful employment and to enable them to continue without turning back to criminal behaviour. The important point to make is that neither prison nor other sentencing structures can lay claim that they solely reduce reoffending rates although if the agencies within the youth criminal justice system were able to work reliably together they are more likely to deter individuals from committing further crimes, enabling them to provide for themselves. The key, however, is to target locations that are prominent to youth crime and focus on teaching the younger generation before they hit the age at risk of heading into crime. Reference List OPSI - Office of Public Sector Information - Criminal Justice Act 1982 - http://www.opsi.gov.uk/RevisedStatutes/Acts/ukpga/1982/cukpga_19820048_en_2#pt1-pb2 accessed 01/12/09 Borstal Changed My Life - 17/10/02 http://news.bbc.co.uk/1/hi/uk/2330061.stm accessed 01/12/09 Youth Justice Board, Youth Rehabilitation Order (2009) http://www.yjb.gov.uk/en-gb/yjs/SentencesOrdersandAgreements/YRO/ accessed 01/12/09 Youth Justice Board - http://www.yjb.gov.uk/en-gb/ accessed 01/12/09 Lancaster Guardian - Youth Prison is Failing - 12 March 09 http://www.lancasterguardian.co.uk/lancasternews/Youth-prison-is-failing-to.5064721.jp - accessed 01/12/09 http://www.justice.gov.uk/inspectorates/hmi-prisons/docs/children_and_young_people-rps.pdf http://www.hmprisonservice.gov.uk/resourcecentre/publicationsdocuments/index.asp?cat=85 Davies, M. and Croall, H. and Tyrer, J. (2005) Criminal Justice 3rd Edition, Pearson Education Limited: Essex Pilot Scheme, Direct Gov, 2009. http://www.direct.gov.uk/en/Nl1/Newsroom/DG_071870 accessed 08/12/09 Rethinking Youth Justice: Comparative Analysis, International Human Rights and Research Evidence ...read more.