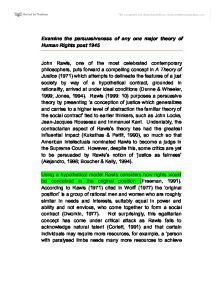 Theories of Rights. John Rawls, one of the most celebrated contemporary philosophers, puts forward a compelling concept in A Theory of Justice (1971) which attempts to delineate the features of a just society by way of a hypothetical contract, grounded i

Examine the persuasiveness of any one major theory of Human Rights post 1945 John Rawls, one of the most celebrated contemporary philosophers, puts forward a compelling concept in A Theory of Justice (1971) which attempts to delineate the features of a just society by way of a hypothetical contract, grounded in rationality, arrived at under ideal conditions (Dunne & Wheeler, 1999; Jones, 1994). Rawls (1999: 10) purposes a persuasive theory by presenting 'a conception of justice which generalizes and carries to a higher level of abstraction the familiar theory of the social contract' tied to earlier thinkers, such as John Locke, Jean-Jacques Rousseau and Immanuel Kant. Undeniably, the contractarian aspect of Rawls's theory has had the greatest influential impact (Kukathas & Pettit, 1990), so much so that American intellectuals nominated Rawls to become a judge in the Supreme Court. However, despite this, some critics are yet to be persuaded by Rawls's notion of 'justice as fairness' (Alejandro, 1998; Boucher & Kelly, 1994). Using a hypothetical model Rawls considers how rights would be conceived in the original position (Freeman, 1991). According to Rawls (1971) cited in Wolff (1977) the 'original position' is a group of rational men and women who are roughly similar in needs and interests, suitably equal in power and ability and not envious, who come together to form a social contract (Dworkin, 1977). ...read more.

In addition to these, Rawls has more recently added freedom of movement and the free choice of occupation to the list (Hayden, 2001). Rawls's cited in Jones (1994: 129) justifies individuals having rights to these freedoms by stating that 'autonomous beings must be respected'. Rawls elaborates by claiming: "Equal voting rights and the other equalities associated with democracy are important, not for what they contribute to the process of decision making, but as public acknowledgements of the equal status accorded to individuals... people have a right not be treated in that publicly humiliating fashion" (Rawls, 1971 cited in Jones, 1994: 179) This highly evocative statement is a very persuasive way of confronting the reader with the demands of justice as fairness (Jones, 1994). Admittedly, Rawls advocates that the natural human is used to large array of primary goods, however it is perhaps more appropriate to suggest that these primary goods are reflective of consumer society. It is highly unlikely that natural society wants as much as Rawls suggests. In response to this criticism, Rawls refined and narrowed his definition of primary goods in later work (Jones, 1994). To ensure we have access to these primary goods, we would recognise a need to draft a code of conduct that we could all agree on. ...read more.

According to Rawls, the governmental institute we would have opted for in the original position would be democracy. Although there is no historical evidence to suggest we would naturally opt for democracy, it is persuasive to suggest we would reject utilitarianism due to its failure to acknowledge 'the separateness of persons', which could consequently result in majoritarianism (Jones, 1994: 62). After examining A Theory of Justice, it is fair to say, despite critical attention, Rawls is an impressive systemic thinker who has succeeded in restating liberalism in a persuasive and dramatic way. Rawls puts forwards an abstract and complex theory, crammed with arguments in attempt to remove any lingering doubts critics may still be harbouring (Barry, 1973). Although it may be epistemologically impossible for the parties to 'possess all and only the knowledge Rawls imputes to them' (Wolff, 1977: 72) and despite the veil of ignorance making the task of arriving at moral consensus infinitely easier than it really is (Dunne & Wheeler, 1999), upon reflection Rawls offers a convincing theory 'that would seem reasonable (perhaps even eminently plausible) to persons in others cultures or in other times' (Boucher & Kelly, 1994: 263). It is fair to conclude that Rawls's relentless attempt to present 'justice as fairness' has indeed led us all to subconsciously challenge the way in which we should make decisions about rights. ...read more.