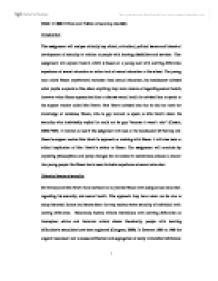 This assignment will analyse critically key ethical, attitudinal, political issues and historical development of sexuality in relation to people with learning disabilities and services. This assignment will explore Task B, which is based on a young man w

Introduction This assignment will analyse critically key ethical, attitudinal, political issues and historical development of sexuality in relation to people with learning disabilities and services. This assignment will explore Task B, which is based on a young man with learning difficulties experience of s****l education or rather lack of s****l education at his school. The young man called Simon experienced exclusion from s****l education, his headmaster advised other pupils to speak to him about anything they were unsure of regarding s****l health; however when Simon approached him to discuss s****l health he advised him to speak to his support teacher called Mrs Hewitt. Mrs Hewitt advised him that he did not need the knowledge of condoms, Simon, who is gay wanted to speak to Mrs Hewitt about his sexuality who inadvisably replied he could not be gay "because it wasn't nice" (Carson, 2002; P207). In relation to task B this assignment will look at the headmaster Mr Bentley and Simon's support teacher Mrs Hewitt's approach to working with Simon. It will also look at ethical implication of Mrs Hewitt's advice to Simon. The assignment will conclude by exploring philosophical and policy changes that is needed in mainstream schools to ensure that young people like Simon had a more inclusive experience of s****l education. Historical issues of sexuality Mr Bentley and Mrs Hewitt have decided not to provide Simon with adequate s*x education regarding his sexuality and s****l health. This approach they have taken can be due to many historical factors and issues about the way society views sexuality of individual with leaning difficulties. Historically Society viewed individuals with learning difficulties as incomplete adults and literature review shows historically, people with learning difficulties's sexualities have been neglected (Gougeon, 2009). In Between 1880 to 1940 the eugenic movement led to mass sterilization and segregation of many vulnerable individuals in particular individuals with learning difficulties from the society (Greenspan, 2002). It could be argued that the eugenic movement was triggered by Jukes (1875) and Kallikaks (1912) ...read more.

(Carson, 2002; P 207)". In relation to this quote the assignment will explore ethical and legal implication of Mrs Hewitt's advice. Firstly a person with learning difficulties who has no or very little knowledge of s****l conduct and s****l behaviour can lack the capacity consent to s****l behaviour (Foundation for people with learning disabilities, 2001). Legally the Mental capacity act (2005) expects the service providers to provide individuals with range of accessible information so they can make an informed decision (Hollomotz, 2007). Since Simon had very little knowledge on sexuality and s****l health he did not have the capacity to make an informed decision as he did not know the full fact of what he was consenting to and the consequence of his action (Keywood, 2003). Ethically speaking without the full knowledge of s*x and its consequences Simon's s****l health and wellbeing could be placed in great danger (Harris and Tough 2004). Individuals with learning difficulties who do not have prior knowledge on s*x may not be able to exercise resistance to the act, as they might not be aware of what they are embarking upon (Hollomotz, 2007). According to the s****l Offence Act (2003) a s****l experience is unwanted if the person did not consent, however in order to consent the person would need full knowledge of the situation, this links into the mental capacity act (2005) (Home Office, 2003). However, could there be a possibility that Mrs Hewitt's denial to provide s*x education to Simon was based on false stereotypical judgement? Heywood (2003) states there is an issue of over protecting people with learning difficulties which can limit their chances to form meaningful relationships (Heywood, 2003). Overprotecting vulnerable people is due to stereotypical view of individual, society views them to be uncompleted adults who are not self sufficient therefore need protection (Evans and Rodgers, 2000). Perhaps this was the case with Simon, although Mrs Hewitt's advice and attitude towards Simon proved to be breaking the ethical code of conduct on service delivery. ...read more.

organisational ethos is a significant influence on the attitudes of individual staff because in the absence of policies staff are more likely to enforce or relay on their own views, which can lead to profound issues (Christian et al, 2001). The second recommendation I would make is to enforce policies for equal treatment of people with learning difficulties. Reflecting on the past, Normalisation theory provided growing literature on s*x education for people with learning difficulties (William and Nind 1999). Normalisation wanted people with learning difficulties to have access to ordinary lifestyle and valued status not just in community living but in s*x and marriage too (William and Nind, 1999). Therefore, in order allow individuals with learning difficulties to experience same level of s*x and relational freedom, schools would need to make s*x education information accessible to the individual. Adapting information to a level where they would understand would ensure they receive same level of understanding as their peers. Inclusion means more than being able to take part , it's important that people with leaning difficulties feel safe in the class room and their concerns about s****l issues is taken into consideration(Price and Simpson , 2005) . Perhaps enforcing Person Centred Planning in development of policies would ensure issues such as individual's needs and concerns are addressed adequately (Mansell and Beadle-Brown, 2004). In relation to accessibility it's important to enforce the philosophy of the social model, because as social model states it's the environment that disables a person not their disability (Walsmley, 2001). As well as adapting the environment and curriculum, it's also important to provide support for parents on their children's s*x and relationship needs , Swain et al (2003) recognises that parental involvement is important for young people and adds effectiveness on relationship development ( Swain et al, 2003). To conclude staff training and inclusive involvement of individuals with learning difficulties in s*x and relationship education should be an important aspect of any policy design. Policies should adheres and try to work with the framework of Valuing people (2001) and SENDA (2007) to provide a person centred s*x and relationship education. ...read more.