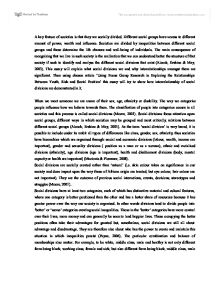 This essay will explain what social divisions are and why interrelationships amongst them are significant. Then using chosen article Using Focus Group Research in Exploring the Relationships Between Youth, Risk and Social Position this essay will tr

A key feature of societies is that they are socially divided. Different social groups have access to different amount of power, wealth and influence. Societies are divided by inequalities between different social groups and these determine the life chances and well-being of individuals. The main consequence of recognizing that we live in such society is the realization that we can understand better the structure of that society if seek to identify and analyse the different social divisions that exist (Alcock, Erskine & May, 2003). This essay will explain what social divisions are and why interrelationships amongst them are significant. Then using chosen article 'Using Focus Group Research in Exploring the Relationships Between Youth, Risk and Social Position' this essay will try to show how interrelationship of social divisions are demonstrated in it. When we meet someone we are aware of their s*x, age, ethnicity or disability. The way we categorise people influence how we behave towards them. The classification of people into categories occurs in all societies and this process is called social divisions (Moore, 2001). Social divisions focus attention upon social groups, different ways in which societies may be grouped and most critically, relations between different social groups (Alcock, Erskine & May, 2003). As the term 'social division' is very broad, it is possible to include under its ambit all types of differences like class, gender, s*x, ethnicity, thus societies have hierarchies which are organised through: social and economic divisions (labour, wealth, income are important), gender and sexuality divisions ( position as a man or as a woman), ethnic and racialised divisions (ethnicity), age divisions (age is important), health and disablement divisions (body, mental capacity or health are important) ...read more.

For example Carlos and Smith were similar in one way (both were African - American) and thus different from Norman who was white. But they were also all similar in other ways - they were all athletes (National Council of Educational Research and Training, 2007). Social divisions have a major affect on the way that people see themselves and the structure of society, but interrelationships between social divisions are significant too (Marsh, 2006). We cannot exist in isolation and ignore the fact that we often group with those who are like us. Just as we pigeonhole other people and adapt our own behaviour towards them, so too do they adapt to us, in a continuing creative process but these values can alienate people, who are not like us (Payne, 2006). The social divisions can function to reinforce the material inequalities of individuals or interrelate to produce contradictory locations where human subjects are positioned differentially within these social divisions. For example black working - class men may be in a position of dominance in terms of gender but subordination in terms of 'race' and 'class'. It can also involve psychological costs where you may identify with one position but are located in another - this may apply to transsexuals, middle-class children in working-class schools, ethnic minority children who identify with the majority but are excluded, women who identify with male-defined occupations and attitudes: all these may involve bullying and harassment as well as new forms of social avoidance (Anthias, 2001). ...read more.

Heavy drinking has long been associated with a tough, working-class, 'hegemonic' masculinity and Liam, although middle - class, performed his gender in such terms, highlighting that gender and class intersect in complex ways (Merryweather, 2010). However, Mark (higher social position) experienced and understood alcohol consumption in quite different terms, and deployed his own 'rhetoric of reason', challenging Liam's claim. In doing so he at once undermined Liam's claim to a hegemonic masculinity and performed his own masculinity in a way which drew a clear distinction between himself and Liam. Then Liam reproduced a distinction around class and gender, positioning Mark in terms of a subordinate masculinity, as a weak and inferior man who lacked the authority to speak on issues such as alcohol consumption. This conflict showed that material experiences can be understood differently because of the relationships between class and gender (Merryweather, 2010). To conclude, this essay has reviewed what social divisions are, why they are significant and how they are shown in my chosen article. To sum up, social divisions refers to social groups, different ways in which societies may be grouped and relationships between these groups. Social divisions can be distinguished on the basis of characteristics such as gender, age, class, ethnicity, health, s*x, etc. Relationships between social divisions are significant too because they can reinforce social inequality. Using article this essay demonstrated how young people identi?ed different issues as risky aspects of their everyday lives through relationships with the material world according to social class, gender and ethnicity. ...read more.