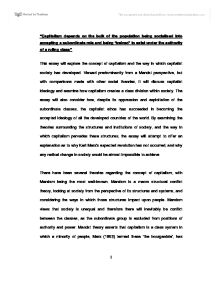 This essay will explore the concept of capitalism and the way in which capitalist society has developed. Viewed predominantly from a Marxist perspective, but with comparisons made with other social theories, it will discuss capitalist ideology and examine

"Capitalism depends on the bulk of the population being socialised into accepting a subordinate role and being 'trained' to exist under the authority of a ruling class" This essay will explore the concept of capitalism and the way in which capitalist society has developed. Viewed predominantly from a Marxist perspective, but with comparisons made with other social theories, it will discuss capitalist ideology and examine how capitalism creates a class division within society. The essay will also consider how, despite its oppression and exploitation of the subordinate classes, the capitalist ethos has succeeded in becoming the accepted ideology of all the developed countries of the world. By examining the theories surrounding the structures and institutions of society, and the way in which capitalism pervades these structures, the essay will attempt to offer an explanation as to why Karl Marx's expected revolution has not occurred, and why any radical change in society would be almost impossible to achieve There have been several theories regarding the concept of capitalism, with Marxism being the most well-known. Marxism is a macro structural conflict theory, looking at society from the perspective of its structures and systems, and considering the ways in which those structures impact upon people. Marxism views that society is unequal and therefore there will inevitably be conflict between the classes, as the subordinate group is excluded from positions of authority and power. ...read more.

Althusser asserts that 'the reproduction of labour power needs not only a reproduction of its skills but also .... a reproduction of it's submission to the ruling ideology' (Althusser, 1971, p.127). The most fundamental of society's structures, the family, is also viewed by Marxists as beneficial to the capitalist ideal. As in education, family instills the values and beliefs, and enforces the discipline necessary for the next generation of workers and owners. Functionalists of course would argue that the family is an essential core institution of society, socialising children into society and teaching them the morals and values necessary for the stability of society as a whole. Marxist Friedrich Engels (1985) theorised about the role of the family within a capitalist system. He suggested that families had evolved into a bourgeois structure, with the head male as a breadwinner slave with a dependent wife and children. He states that pre-capitalism people had no concept of property and, as monogamy was not practiced, the children 'belonged to', and were raised by, all members of the community. It was agriculturisation that first established a need for paternity, in order to ensure rights of inheritance, and this eventually led to industrialisation and a patriarchal society, where men become wage slaves and women stay at home to raise the next generation of wage slaves. ...read more.

Furthermore, 'the media make inequalities appear natural and inevitable to those who suffer the deprivation and oppression they entail' (Strinati, 2004 p.122). In conclusion, this essay has explored the concept of capitalism from the critical viewpoint of Marxism, with reference and comparisons made to both functionalism and Weberism. In accepting that capitalism is the social system under which the world exists, we must also accept that society is divided by the class divisions unavoidably created by that system, and that the ideology that prevails is the ideology of the ruling classes. Marxism defines the division of class as one which exploits the subordinate group, and as such the classes are always in conflict with each other. It can also be argued that the ruling ideology is so firmly entrenched within the structures and institutions of society that little, if any conflict is perceived, and in that respect capitalism has the consensus of society. The hegemonic process by which consensus is achieved must adapt itself constantly to the changing needs of society in order to effectively repress people into conforming economically and politically. It can be argued that the mass media plays a vital part in the hegemonic process and is able to manipulate people's personalities, by repressive desiblimation, to such an extent that the capitalist system is accepted without question. For these reasons, Karl Marx's vision of a social revolution is unlikely to ever come to fruition. ...read more.