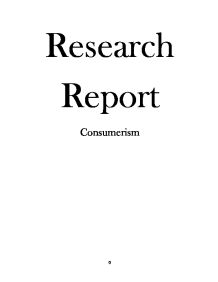 This report aims to research interpersonal communication in a `dynamic` environment, in this case, West Quay, the biggest Mall in Southampton. Its purpose is to comment on some important aspects regarding consumerism and to analyse human behaviour under

Research Report Consumerism Introduction Consumerism can be seen as a social order fostering of a desire to purchase goods and services in great amounts. It is considered a new way of interpersonal communication, because people begin to define themselves in relation to the objects surrounding them, which speak for them. Regarding communication, there is a general tendency to disclose information just by dressing in a particular way or by eating in carefully selected restaurants. Media plays an important role in the development of consumerism: media promotes glamorous lifestyles, luxurious holidays or expensive houses. This is why people see this kinds of behaviours and feel the need to possess the same things; their aim in life begins to lean towards luxury and numerous bank accounts. In this way,consumerism becomes a part of everybody`s mundane reality. Colin Campbell claims that:"Humanly conceived, therefore, consumption refers to the use of goods in the satisfaction of human wants, and is typically the outcome of consciously motivated behaviour" (Lee,2000,50) . As Colin Campbell states, consumerism is all about satisfaction of human wants, but what it is going to happen if they will never end? Maybe this is a part of humans' nature and during our whole existence we continuously ask for things to feel better but that is just a temporary feeling, because we always find enough reasons to feel depressed and only see the negative sides of life. Perhaps all the individuals should learn to give something back and try to be less selfish. ...read more.

Strictly speaking, the humans of the age of affluence are surrounded not so much by other human beings ,as they were in all previous ages, but by objects" (1998,25). The idea of abundance, which is argued by Baudrillard, allows buyers to invest so much money in objects. Anywhere you go there is a huge variety of products, which give you the chance to purchase whatever you yearn for. The only impediment is money, whose importance is often neglected by major consumers, who don't have to worry about this aspect. People buy goods just because of their impulsive need to consume, to spend money, not because they really need them. Sometimes they are attracted just by the packaging and the exteriors, the content being less important. We always say that we "need" something, or that a certain thing satisfies our "needs", but what does that actually mean? "Need is already given its object by the available goods; preferences are orientated by the particular spread of products offered on the market: this is, basically, effective demand." (Baudrillard,1998,70). Why everybody is a consuming addict and cannot help shopping? Maybe due to the fact that they determine their degree of happiness in regard with their belongings or how much they own. As Baudrillard explains, "Happiness is the absolute reference of the consumer society: it is the strict equivalent of salvation and it is based on individualistic principles. Happiness has to be measurable. It has to be a well-being measurable in terms of objects and signs; it has to be 'comfort'."(1998, 49) ...read more.

Conclusions & Recommendations To conclude, I need to state that researching this project was an enjoyable experience for me; I learnt more about human behaviour and interpersonal communication just by trying to observe an environment such as The Mall. In addition, I discovered the significant impact that consumers have on the environment and on the society and I looked at consumerism, for the first time, as a way of interpersonal communication. Furthermore, I became aware of its negative aspects but also of its ambiguity: we know that consumerism is based on needs, but as Baudrillard states, needs are never actually fulfilled, and this is why it seems that we are involved in vicious circle, which is not going to end:"The modern consumer is characterized by an insatiability which arises out of a basic inexhaustibility of wants themselves, which forever arise, phoenix-like, from the ashes of their predecessors. Hence no sooner that one is satisfied than another is waiting in line clamouring to be satisfied; when this one is attended to, a third appears, then subsequently a fourth, and so on, apparently without end. The process is ceaseless and unbroken." (Lee,2000,49) Anyway, what is going to happen in the future can not be predicted.However, Baudrillard makes a statement will only be proved by time:"It is even possible that consumption will gradually concede to other criteria and other types of behaviour the preeminent role it currently plays in the variable geometry of status. Ultimately, it will become the prerogative of everyone when it no longer has any meaning. ...read more.