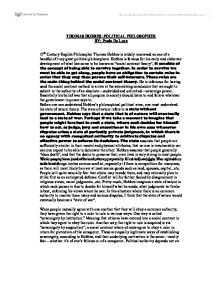 THOMAS HOBBES :POLITICAL PHILOSOPHER BY: Paula De Lyon 17th Century English Philosopher Thomas Hobbes is widely renowned as one of a handful of truly great political philosophers. Hobbes is famous for his early and elaborate development of what has come to be known as "social contract theory", it consists of the concept of being able to survive together. In order to survive we must be able to get along, people have an obligation to certain rules in order that they may then pursue their self-interests. These rules are the main thing behind the social contract theory. He is infamous for having used the social contract method to arrive at the astonishing conclusion that we ought to submit to the authority of an absolute-undivided and unlimited-sovereign power. Essentially his belief was that all peoples in society should listen to and follow whatever the government in power says to. Before one can understand Hobbes's philosophical political view, one must understand his state of nature theory. ...read more.

In this situation where there is no common authority to resolve these many and serious disputes, I think that the state of nature would eventually become a "state of war". When people mutually agree with one another that they will obey a common authority, they have given the right to a ruler to rule in various ways. One way is called "sovereignty by institution." Meaning that citizens have entered into a social contract in which they agree to obey the ruler. Another way, the right to rule is acquired is via "sovereignty by acquisition"; a social contract where citizens agree to obey a ruler in return for protection of the conqueror. These are equally legitimate ways of establishing sovereignty, according to Hobbes, and their underlying motivation is the same-mostly fear-whether it's of one's fellows or of a conqueror. Political authority depends not on how a government came to power, but only on whether it can effectively protect those who have consented to obey it; political obligation ends when protection ceases. ...read more.

In terms of whether or not Hobbes' ideology is feasible when related to society, I would have to say that it is not. Hobbes' idea of how a society should be run ad what type of government should be I place is more suited for the Victorian era where monarchies and dictatorships weren't welcomed, so much as tolerated. In a society such as ours is, I cannot imagine an absolute governmental system, where people have to submit themselves to an absolute political authority. In my view, where Hobbes claims that this type of authority will decrease the degeneration to civil war, it only causes the citizens of society to become fed-up with someone else, basically running their lives. Examples of how monarchies have tried ad failed can be see throughout the world, perhaps one of the most famous happened in Russia where the Zar was overthrown by his own people. This proves along with many other examples that often times, dictatorships are not the way in which to run a society; democracy is needed to keep peace and promote equality and fairness in a society. While human beings by nature do need guidance we do not need dictators. ...read more.