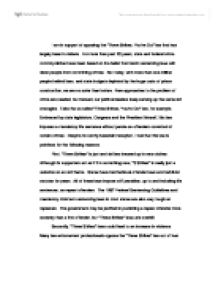 I am in support of opposing the "Three Strikes, You're Out" law that has largely been in debate. For more than past 20 years, state and federal crime control policies have been based on the belief that harsh sentencing laws will deter people from committing crimes. But today, with more than one million people behind bars, and state budgets depleted by the huge costs of prison construction, we are no safer than before. New approaches to the problem of crime are needed, but instead, our political leaders keep serving up the same old strategies. Take the so-called "Three Strikes, You're Out" law, for example. Embraced by state legislators, Congress and the President himself, this law imposes a mandatory life sentence without parole on offenders convicted of certain crimes. Despite its catchy baseball metaphor, I feel that this law is pointless for the following reasons. First, "Three Strikes" is just and old law dressed up in new clothes. Although its supporters act as if it is something new, "3 Strikes" is really just a variation on an old theme. States have had habitual offender laws and recidivist statutes for years. All of these laws impose stiff penalties, up to and including life sentences, on repeat offenders. The 1987 Federal Sentencing Guidelines and mandatory minimum sentencing laws in most states are also very tough on repeaters. ...read more.

But experts tell us that age is the most powerful crime reducer. Most crimes are committed by men between the ages of 15 and 24. Only one percent of all serious crimes are committed by people over age 60. Sixth, "Three Strikes" will have a disproportionate impact on minority offenders. Racial bias in the criminal justice system is rampant. African American men, in particular, are over represented in all criminal justice statistics-- arrests, victimizations, incarceration and executions. This imbalance is largely the result of the "war on drugs." Although studies show that drug use among blacks and whites is comparable, many more blacks than whites are arrested on drug charges. This is because the police find it easier to concentrate their forces in inner city neighborhoods, where drug dealing tends to take place on the streets, than to mount more costly and demanding investigations in the suburbs, where drug dealing generally occurs behind closed doors. Today, one in four young black men is are under some form of criminal sanction, be it incarceration, probation or parole. Because many of these laws include drug offenses as prior "strikes," more black than white offenders will be subject to life sentences under a "Three Strikes" law. Seventh, 'Three Strikes" laws will impose life sentences on offenders whose crimes do not warrant such harsh punishment. ...read more.

Currently, If 34 million serious crimes are committed each year in the U.S., and only 3 million result in arrest, statistics should drastically change. Serious crimes that are committed will most likely decrease because offenders will think twice about the consequences of the "Three Strikes" law. In conclusion, I am still in support of opposing the "Three Strikes, You're Out" law that has been quite a large argument in the past few years. I feel that my beliefs are a better advocated debate than opposite side. We cannot enforce such a strict law because the changes that follow it will have too much of a negative impact on the correctional operations of the criminal justice system. Today, the U.S. has the dubious distinction of leading the industrialized world in per capital prison population, with more than one million men and women behind bars. The typical inmate in our prisons is minority, male, young and uneducated. More than 40 percent of inmates are illiterate; one-third were unemployed when arrested. This profile should tell us something important about the link between crime and lack of opportunity, between crime and lack of hope. Only when we begin to deal with the conditions that cause so many of our young people to turn to crime and violence will we begin to realize a less crime ridden society. ...read more.