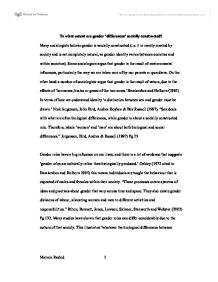 To what extent are gender 'differences' socially constructed? Many sociologists believe gender is socially constructed (i.e. it is mostly created by society and is not completely natural, as gender identity varies between societies and within societies). Some sociologists argue that gender is the result of environmental influences, particularly the way we are taken care of by our parents or guardians. On the other hand a number of sociologists argue that gender is the result of nature, due to the effects of 'hormones, brains or genes of the two sexes.'Haralambos and Holborn (1995) In terms of how we understand identity 'a distinction between sex and gender must be drawn.' Nick Jorgensen, John Bird, Andrea Heyhoe & Bev Russell (1997). "Sex deals with what are often biological differences, while gender is about a socially constructed role. Therefore, labels 'women' and 'man' are about both biological and social differences." Jorgensen, Bird, Andrea & Russell (1997) Pg 23 Gender roles have a big influence on our lives, and there is a lot of evidence that suggests 'gender roles are culturally rather then biologically produced.' Oakley (1972 cited in Haralambos and Holborn 1995) this means individuals are taught the behaviour that is expected of males and females within their society. ...read more.

they were also organised with schoolwork and homework. However, the stereotype of the male was the 'macho male' that did not care about authority and just liked to be in the company of other males. Researchers felt some of the boys were already fulfilling this stereotype in their approach to school. Moreover "sociologists argue that teachers spend more time with boys and concentrate their efforts more on them." (Moore 1987 Pg 53) Like parents who are more likely to label their sons as less interested in school and education at an early age (Eccles study) teachers have different expectations of from boys and girls. "Boys are expected to be more boisterous, girls to be quieter and more obedient. As a result, teachers are likely to treat the children differently according to their sex." (Moore 1987 Pg 53) There are also many other ways in which socialisation into gender roles takes place. Identification also takes place; children see themselves as their parents or television heroes. So as well as imitating their parents they also play at being parents/hero figures. Peer group pressure is also applied by friends, as friendships develop along sex lines with boys playing with boys and girls playing with girls, both playing different types of games. ...read more.

Some sociologists argue that "social scientists who assume that human beings behave simply in terms of their culture and society are ignoring what they call human biogrammer." (Haralambos and Holborn 1995 Pg 583) This is a genetically based programme which inclines people to behave in certain ways. Although it is similar in men and women, "Tiger and fox argue that compared to women, men are more aggressive and dominant and that these characteristics are genetically based." (Haralambos and Holborn 1995 Pg 584) This is partially because genetic inheritance and because a genetic 'adaptation to a hunting way of life.' Male's hunt which can be found to be an aggressive activity. To conclude, to support a biological case we would need to establish that a universal difference exists, that men and women across societies are characterised by more or less identical behaviours. We would also need to show that this difference is actually caused by biology and not in the similarities in upbringing. "The more segregated the worlds that women and men inhabit, the harder it is to demonstrate that nature, rather than nurture, accounts for gender difference. (Bilton, Bonnet, Jones, Lawson, Skinner, Stanworth & Webster 2002 Pg 132) Sociologists have tried to move away from the debate as to whether sex and gender shapes male and females behaviour "Both David Morgan and Linda Birke argue sex and gender interact. Sex differences and vice versa. ...read more.