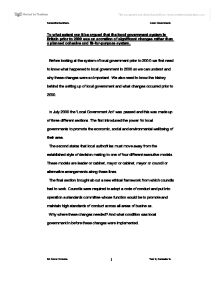 To what extent can it be argued that the local government system in Britain prior to 2000 was an accretion of significant changes rather than a planned cohesive and fit-for-purpose system.

To what extent can it be argued that the local government system in Britain prior to 2000 was an accretion of significant changes rather than a planned cohesive and fit-for-purpose system. Before looking at the system of local government prior to 2000 we first need to know what happened to local government in 2000 so we can understand why these changes were so important. We also need to know the history behind the setting up of local government and what changes occurred prior to 2000. In July 2000 the 'Local Government Act' was passed and this was made up of three different sections. The first introduced the power for local governments to promote the economic, social and environmental wellbeing of their area. The second states that local authorities must move away from the established style of decision making to one of four different executive models. These models are leader or cabinet, mayor or cabinet, mayor or council or alternative arrangements along these lines. The final section brought about a new ethical framework from which councils had to work. Councils were required to adopt a code of conduct and put into operation a standards committee whose function would be to promote and maintain high standards of conduct across all areas of business. Why where these changes needed? And what condition was local government in before these changes were implemented. Local government has its roots in medieval times. It developed into three units of county, borough and parish councils. Over the next few centuries local government continued to grow albeit in a rather informal fashion to encompass the concerns and problems faced over this period of time. ...read more.

The Act gave central government powers to control local authority spending by the introduction of financial penalties as a consequence of excess spending levels. The Act also stated that a certain amount of work in the areas of maintenance, construction and highways could no longer be carried out solely by local authorities but must be put out to competitive tender. Another impact of this Act was that it introduced provisions for urban regeneration initiatives to sidestep local authority control. But was this the big change that Thatcher envisioned? Putting limits on local authority expenditure did not have the desired effect. Rather than reducing expenditure many local authorities used rate increases and 'creative accounting' to make up the shortfall and avoid any financial penalties. The conservatives responded and tried to stop the ambiguities within the new arrangement by introducing a further six amendments to the grant system. The government then introduced the 'Local Government Finance Act 1982' which shifted the focus from limiting expenditure to controlling the income that local authorities could raise. The Act limited rate increases to one raise per year. However this led to more problems, Local authorities found themselves operating in conditions of considerable uncertainty and therefore continued to increase rates as a means of building up reserves to guard against further, unpredictable changes in the grant regime.(1997) Rhodes R. In more simpler terms due to this instability local authorities were anxious that if their grants were cut they would not have enough money to cover their expenditure and so raised the rates to a higher level so they were able to set aside money in the case of a shortfall. ...read more.

the Labour party it was the Conservative party which bore the brunt of the voter's discontent The failure of the community charge was seen as the central reason for Thatcher's downfall and in John Major took over as Prime Minister in 1990. Major's only priority at this time was to find an acceptable replacement for the unpopular community charge and in 1992 council tax was introduced this was a system of property tax that what tiered depending on the property's value. This was very similar to the rates system that had previously been in place. There were other small aspects of local government reform during Major's time as leader although in the main he continued with previous conservative policies toward local government. In 1992 the Local Government Commission was established to explore whether it was feasible to change the structure of local government from the two tier system, still in use in many areas of England, to a system of unitary authorities. The commission recommended the establishment of forty-six new unitary councils. This eventually happened but only after some amount of conflict between central government and individual local authorities. In conclusion although many changes have occurred to the role of Local Government, in particular during the latter part of the last century, there was never a complete overhaul of the system. Rather it was accumulation of numerous minor modifications and reforms that gradually stripped local government of its powers rather than improving its role. Although 'The Local Government Act' of 2000 was a significant change to the system this has still not returned the control from central to local government and there are still many changes which need to be made. ...read more.