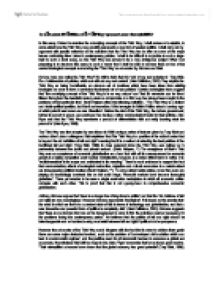 To what extent do the ideas of the 'Third Way' represent a new form of politics?

To what extent do the ideas of the 'Third Way' represent a new form of politics? In this essay I intend to examine the underlying concepts of the Third Way, I shall endeavor to explain, to some extent how the Third Way may possibly represents a new form of western politics. I shall carry out my argument with specific reference to the solutions that the Third Way has to offer on some of the major issues confronting New Labour's contemporary policies. I shall in be difficult to do justice to such a large topic in such a short essay, as the Third Way has proven to be a very ambiguous subject. What I am proposing is to structure this essay in such a manor that I shall be able to address three or four of the central ideological concepts surrounding the 'Third Way' as advocated by Giddens and Blair. So how does one define the Third Way? It's critic's claim that it is 'void of any real substance'. They think it's a 'collaboration of policies, which are with out any real content'. (Alex Callinicus, 2001) They explain the Third Way as being 'undefinable, an obscure set of doctrines which have been taken from existing ideologies on order to form a somewhat incoherent set of new policies'. Certain sociologists have suggest that 'the underlying concept of the Third Way is in no way unique' and 'that it's remnants can be found littered throughout the twentieth century where a compromise or a third way has always been sought to the problems of that particular time'. ...read more.

Tony Blair states in his explanation of the Third Way: 'Just as economic and social change were critical to sweeping the right to power, so they were critical to it's undoing'. The challenge for the Third Way is to 'engage fully with the implications of the change'. The changes he identifies concern global markets and culture, technological advance and information industries. (Collin Hay 1999) The Third Way seeks to promote global developments at both the local and national level. Blair and Giddens have suggested that 'the advancement of global markets and technologies, enhance the ideals of community, locally, nationally, and globally'. With this there will come a new political agenda, which is founded, on mutual responsibility across the globe. 'Our aims will have far reaching consequences in terms of opportunities for people and businesses through the achievement of an open world and an open economy'. (Tony Blair, 1999) However, the Third Way's success, they claim will rest on a 'strong mutual feeling of certain values through a global commitment to help those affected by environment, world debt and genocide'. According to their plans, globalisation is meant to serve as 'a great engine of economic growth and a spurring innovation', making capital and labour much more productive than when they were under protectionism. (David Halpern, 2000) The Third Way proposes the 'restructuring of some key parts of the welfare state'. There are changes within the society, which make appropriate changes in welfare state structures unavoidable. ...read more.

Otherwise it would not only damage the public identity of social democracy and deny its confession of basic values, but also contribute to social disintegration. Therefore, a 'Third Way project must conform by a concept not just of 'opportunities for all', but of social justice, which implies the guarantee of a minimum standard of material well being'. Of course, such a guarantee implies 'the individual's obligation to seize every opportunity offered to him by the markets or the society to make his own living'. (Anthony Giddens, 1998) Thus, employability, may be one of the useful objectives for welfare state reform, but not the sufficient condition for a renewed social democratic project as long as there are not enough jobs available for everybody. In conclusion I shall prefer to sit on the fence and watch the Third Way unravel itself. For as I have suggested the Third Way certainly could be interpreted as a unique form of modern politics. However the Third Way will be interpreted differently by each European government. Thus in order for the Third Way to be successful as truly new form of politics that really can transgress the line between left and right it must be introduced with certain structural elements. Firstly there is a need for 'moral principles and priorities'. Secondly there is a need for 'a more detailed, clear ideology that relates more to the real world' and thirdly 'these principles need to be clear, with policies and practices on how to change current policies to Third Way policies'. ...read more.