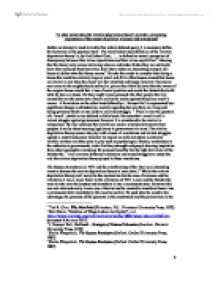 To what extent does the &quot;relative deprivation theory&quot; provide a convincing explanation of the causes of political violence and revolutions?

To what extent does the 'relative deprivation theory' provide a convincing explanation of the causes of political violence and revolutions? Before an attempt is made to tackle this widely debated query, it is necessary define the key terms in the question itself. The most widely used definition of the 'relative deprivation theory' is, by Ted Robert Gurr; '... is defined as actors' perception of discrepancy between their value expectations and their value capabilities'1 Meaning that the theory only comes into being when an individual thinks they are entitled to have what someone they know has. Karl Marx makes an interesting example of a house to define what the theory means.2 He asks the reader to consider there being a house that could be relatively large or small and if all of the houses around that house are similar in size then the owner will feel satisfied and happy, however if someone new came to the neighborhood and built a palace then Marx believes that the owner of the original house would feel a loss of social position and would feel dissatisfied with what he has as a house. He then might in turn persuade the other people that live around him to take some sort of social collective action against this palace and it's owner. A Revolution on the other hand defined by J. Bowyer Bell is represented by a significant change in attitudes by a society regarding the way they are living and being governed which in turn leads to an armed struggle. ...read more.

In turn all of these factors contributed to the violence and revolutions in 1917. No matter how much of a primary role Lenin had in the Revolutions it is safe to say that without the relative deprivation theory at play it would have been impossible for him to take control but in turn it is also unclear to what would have happened if Lenin was not in control of the Bolsheviks or there was no Revolution. In order for a revolution to take place according to Marxist theory the political ideology has to be spread across the globe until the globe has been taken over by this ideology. 7 Thus is can be argued that the revolution in 1917 was a process that lasted only until 1991 and thus not completed. Whilst the relative deprivation theory had an impact on the revolution of 1917 the period in between 1917 and 1991 can be seen as part of the revolution that only had phases of a relative deprivation theory in play. One could then argue that the relative deprivation theory according to the Marxist theory only had a minimal affect on the revolution as whole in the Soviet Union. Then again one could also argue that the eventual fall of the Soviet Union was due to a gradual buildup starting from the 1917 revolution however this counterargument is easily put down by the fact that the Soviet Union endured regular phases of prosperity in their nation. In Andrew Heywood's Politics book there is a theory by Alexis de Tocqueville that states that Revolutions rarely occur from absolute ...read more.

Thus the people from under were the main reason for the abdication of the dictator that has ruled the country for 23 years. This statement supports the fact that the relative deprivation theory was the leading factor in the revolts that took place. Some people in the country also believe that this is a revolution in process however this is disputable as Marxist theory on revolutions mean that in order for it to be classified as a revolution a substantial change in the way the economy is run needs to happen, which currently has not. In conclusion it is credible to say that using the relative deprivation theory, as an explanation to the causes of violence and revolutions is solely dependent on the circumstances of one nation at a given period of time. As I have discussed a revolution can only happen if a government is weak enough to be toppled and there is a strong enough military force to ensure there is a revolution. The weakness and strength of the two variables are possibly the defining cause to whether or not violence can take place or even a revolution. As seen in the Russian revolution Lenin and the Bolsheviks strength and superior tactical abilities meant that they were able to use the relative deprivation to their own advantage in order to take power. In the Ottoman Empire there was a similar process by Mustafa Kemal Ataturk who used his own ideals of nationalism to enlighten the people and secure their confidence in him. However the difference as with the 17th century in the Ottoman Empire, the relative deprivation of a select group of people cannot be a sole reason for violence or revolutions. ...read more.