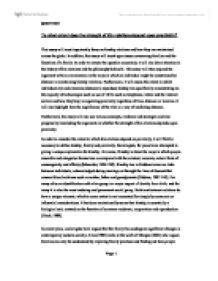 To what extent does the strength of kin relations depend upon proximity? This essay will most importantly focus on kinship relations and how they are maintained across the globe. In addition, this essay will touch upon issues concerning families and the

To what extent does the strength of kin relations depend upon proximity? This essay will most importantly focus on kinship relations and how they are maintained across the globe. In addition, this essay will touch upon issues concerning families and the functions of a family. In order to answer the question accurately, it will also draw attention to the history of kin relations and the philosophy behind it. This essay will then expand the argument with an examination on the ways in which an individual might be constrained by distance in maintaining kinship relations. Furthermore, it will assess the extent in which individuals try and overcome distance to reproduce kinship ties specifically concentrating on the capacity of technologies such as use of ICTs such as telephones, letters and the internet service and how they help in regulating proximity regardless of time, distance or location. It will also highlight how the significance of the visit is a way of mediating distance. Furthermore, the essay will also use various concepts, evidence and strategies and also progress by concluding the argument on whether the strength of kin relations depends upon proximity. In order to consider the extent to which kin relations depend on proximity, it will first be necessary to define kinship, family and proximity. Sociologists, for years have attempted in giving a unique explanation for kinship. ...read more.

Their research shows that telephone communication is very much gendered means of keeping in touch with kin relations. They discovered that 34% of women are in daily contact with their mothers compared to just 12% men. They agree that geographical distance is not a major obstruction to kin contact (Nolan & Scott, 2006:183). Mok et al (2007) discuss the work of Axhausen & Garling (1992) who argue that since the 1960s, advances in transportation and telecommunication technologies such as phones, cars and aeroplanes have made it cheaper and easier for people to maintain ties over longer distances. As Cairncross (1997) agrees with them and argues that the advances are so effective that some sociologists devotedly proclaimed "the death of distance" (cited in Mok et al, 2007:431). In order to maintain kinship ties the immeasurable use of ICTs to communicate across the globe is very important in assessing the strength of kinship dependent on proximity. It is important to acknowledge that new technologies have certainly altered the customs in which people correspond. As suggested by ABS (2003) the amount of households with internet access in Australia increased from 16% in 1998 to 53% in 2003 (cited in Wilding, 2006:126). This shows that individuals are communicating with kin relations in many more ways and living in proximity is not an issue anymore. ...read more.

Similarly, Green (2002) suggests that these new technologies affords room for deepening strong ties between kin relations and makes distance irrelevant. She argues that "time spent using communicational devices makes relationships durable and continuing" (cited in Wajcman et al, 2008:636). Consequently, this fresh development strengthens the relational environment of family traditions, de-emphasising domestic co-location and constructing families without boundaries. By the evidence provided, it is apparent to conclude the argument by stating that today, proximity does not matter for maintaining and strengthening kin relations because of the new technologies been introduced. In 1950's locality and proximity was important in keeping kin relations alive. Whereas, today we live in a more isolated society where people have become disperse. There has been a change in several social patterns in which kinship has not been declined but transformed for the better which keeps the community strong. On the other hand, some may argue that yes, it is possible to communicate across the world but we are loosing closeness. Nevertheless, today kinship still plays a vital role in providing emotional, physical and financial support but the ways it provides in has been transformed dramatically. There is also particular attention towards the fact that kinship roles have not disappeared, rather they have been enhanced with increased mobility. As some may say, it is just a change of society. However, kin relations are been maintained despite physical separation. Modern technology has made possible a very different, yet important kinship structure. To conclude, Distance mattered in the 1950's but it does not today. ...read more.