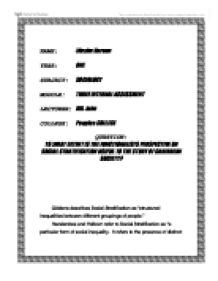 TO WHAT EXTENT IS THE FUNCTIONALISTS PERSPECTIVE ON SOCIAL STRATIFICATION USEFUL TO THE STUDY OF CARIBBEAN SOCIETY?

The Functionalists, Davis and Moore, theory follows that society has to be meritocratic. Meritocracy is based on achievement. Those that work hard should be rewarded. For instance, in the Caribbean many of the persons at the 'top' have achieved their status through hard work and education. They achieve it by staying in school and furthering their education with determination and focus on their ultimate goal achievement. Because the Caribbean can be noted for having education as an important factor in making persons become upwardly mobile. The Functionalists perspective on stratification can be criticized on many fronts and is limited in explaining social stratification in the Caribbean. There are still examples in the Caribbean where people are denied jobs and positions because of their class, race and gender. Even though Davis and Moore argue that inequality is a necessary feature of modern society and that it stimulates everyone to want to achieve many of the persons in the Caribbean do not achieve anything because of their race, gender and class. Social inequality has been apart of the Caribbean system since the days of slavery and indentureship. This is where the whites, blacks and East Indians were distinguished. ...read more.

In Antigua there is no hard and fast rule for placing individuals into their classes and it can be seen that some individuals are not in any class but outside the system. These are the Syrian/Lebanese status group and the White/Expatriate status group. It would be better advised to use a combination of the Functionalists theory and the Marxist theory. The Functionalists see social stratification as contributing to stability in the society. This is not necessarily so in the Caribbean. Social stratification can be more divisive that integrative. In the Caribbean there is a conflict among different groups because of the ranking of groups into layers. There is class conflict and conflict between races and ethnic groups. This as appeared in Trinidad and Guyana where the various ethnic groups are of significant size and are far more complex. According to the Conflict theorist, they agree with the Functionalists that the social stratification system is based on meritocracy. But it serves to reinforce and perpetuate the existing status quo in society. This is that the ruling class will always own the means of production and the working class will exchange their labour for payment. ...read more.